For the Gaudi La Coma Artists’ Residence competition, participants are asked to submit designs for a sustainable artists’ residence and education complex called “La Coma”. It will be located in Huesca, Spain and would need to follow Antoni Gaudi’s design values and principles of sustainability, functionality, aesthetics, and innovation. At this stage, participants should focus on defining a clear, coherent and harmonized set of building volumetrics, demonstrating how new structures would fit within the site and correspond between each other, as well as defining the general architectural guidelines for the future development of the building complex. The jury are looking for designs that have the potential to become an iconic landmark while still remaining sensitive to the natural surroundings.

The Gaudi La Coma Artists Residence is the first in a series of design competitions run in partnership with the Gaudi Knowledge Association and Inngenium Lab to celebrate Gaudi’s intellectual heritage. For this competition, participants are asked to submit an architectural volumetric composition for a sustainable artists’ residence and education complex called “La Coma”. It will be located in Huesca, Spain and would need to follow Antoni Gaudi’s design values and principles of sustainability, functionality, aesthetics, and innovation.

As an example of this principle in Gaudi’s work, in la Pedrera (Casa Mila), he was sued by the owner because he created a big underground parking space. The owner would not understand why it was needed, with only a few cars existing in the whole city. Being a visionary, Gaudi was so ahead of his time by looking into the needs that even the citizens of Barcelona did not see they had, solving a problem that would not be understood until very recently. When he explained his projects or new ideas, there would always be at least one child in the crowd, since they were the only ones who dared to question his work and ask if they did not understand how something would work.

In Sagrada Familia, Gaudi did not only build a church; he went one step further and built a school for the workers’ children, which was unthinkable until that day. This gave them an education that was much more practical and even today could be called innovative. Children planted their plants, drew geometries in the schoolyard, and went on excursions. In Colonia Güell, he created the first workers’ fund, contributed to as a community, where those who were injured or suffered casualties could live off this fund. He also created his currency within the colony. Those workers who were too old to continue working were never fired. Gaudi put them on guard posts or teaching younger workers, but he never wanted to fire anyone because of their age. In his own words, “everyone is capable of being useful; you just have to make the effort to find and empower it.” He brought soccer to the colony, giving workers Sundays as a day off to play football. The colony had one of the first soccer teams in Spain and even competed against Barça.

Sustainability was also a crucial element in Gaudi’s work. Until recently, architects did not care much about the footprint or the impact they left on the world because they didn’t face the problems we face. Gaudi reinvented architecture by paying tribute to Mother Nature and being very conscious and respectful in his creations. There are many examples of this in his work, the most impactful one being the Colonia Guell. The facade of the building is built with bricks which were no longer helpful because they were too burnt. The benches in the church were made from the wooden boxes used to deliver nails from Germany. Moreover, his most well-known recycling technique – called ‘Trencadis’, which is ‘mosaic’ in Catalan – involved breaking down ceramic tiles and forming patterns with the broken pieces on curved shapes or other kinds of surfaces.

He was a great promoter of the “km 0” philosophy and always used indigenous and local people for his work. For this reason, the appearance and form of his work changed a great deal in Astorga and Barcelona. The orange Astorga clay inside gives it a unique meaning, while in Barcelona, you would not find that kind of material. Gaudi toured all towns near Astorga to see how they created their buildings, and from there, he extracted his workers and his process.

The competition is open to all. No professional qualifications are required. Design proposals can be developed individually or by teams (4 team members maximum).
People who have direct personal or professional relationships with jury panel members or organisers may not participate in this competition.

Announcement of the winners 17 February, 2023 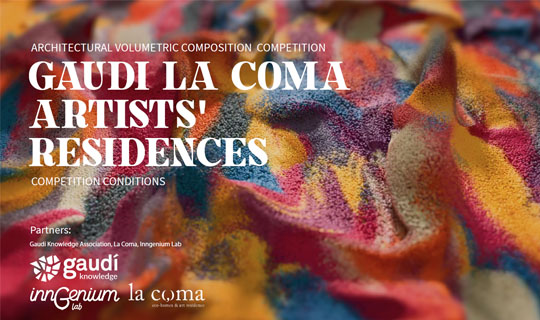