Designed by Helmut Jahn, the State of Illinois Center, also known as James R. Thompson Center, is facing the threat of complete demolition. Located in the Chicago “Loop” it is a major transportation node, commercial center and workspace. The building has been criticized for being ugly, oversized, inefficient, and poorly maintained. However, the Thompson Center has been pivotal to urban transit and a highly democratic contemporary civic center. At the time of its construction in 1985, Helmut Jahn’s State of Illinois Center was a stark contrast to Chicago’s historic and modernist architecture, yet today it is an architectural icon in its own right. For the fourth year in a row, the Thompson Center has been listed in the Landmarks Illinois’ annual Most Endangered Historic Places in Illinois and it was included in Preservation Chicago’s Chicago 7 Most Endangered list in 2018, 2019, and 2020. The Chicago Architectural Club and the Chicago Architecture Center ask the 2021 Chicago Prize participants to envision a new life for the building through restorative architecture.

• J.R. Thompson Center is located at 100 West Randolph Street.
• Site is 2.9 acres and free of alleys.
• Directly links to the city’s busiest CTA station, served by six train lines, and to the Chicago Pedway System, a network of underground pedestrian pathways connecting many downtown buildings and transit stations.
• Located across the street from City Hall.

This is a speculative ideas competition for preserving J.R. Thompson Center through architectural interventions that repurpose the building through rehabilitation. There is not a set program for this competition; your definition of the program is part of the design problem. Submissions will be assessed on the identification of the issues and the design proposal’s efficacy in addressing these issues.

The 2021 Chicago Prize Competition is open to anyone with a vision for Helmut Jahn’s State of Illinois Center/James R. Thompson Center including students, architects, designers, planners, and artists. Members of the Board of Directors of the Chicago Architectural Club, staff and members of the jury or their families, or those involved with the preparation or funding of this competition may not participate. This competition is to be conducted solely via this website. The official language of the competition is English. All drawings and architectural scales should be expressed in feet and inches. 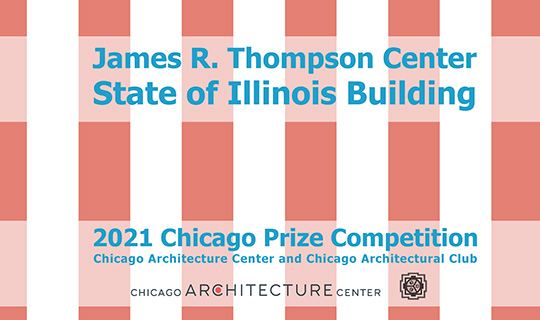