Ideasforward wants to give young creative people from around the world the opportunity to express their views on the future of societies through their innovative and visionary proposals. We are an experimental platform seeking progressive ideas that reflect on emerging themes.

The eco design, sustainable architecture, new materials, concepts and technologies are compelling issues in the societies of the future and the involvement of the whole community is imperative. In an era of globalization where communication was dominated by the technological revolution, there is the need to rethink the cities and how Man relates in a global World as well as rethink the economic, social and cultural patterns of contemporary societies.

The young creatives and thinkers are a precious commodity that we value a lot and so we want to give them voice, because we believe in their value and their ideas and because together we can change the world.

AIM OF THE COMPETITION – 24H
A space where the time limit is used to stimulate your creativity.

This competition proposes give responses in 24H to the social problems, climate changes, humanitarian causes and sociologic problems of the contemporary societies.
Commitment, perseverance, inspiration and hard work are the necessary bases to develop a proposal that meets the premises that will be released regularly in the brief of the competition.

We challenge you to prove your talent in 24 hours!
There are a period of registration on the competition, when it end, started the 24H competition!
You have 24H to develop a proposal that responds to the program contained on a brief that you only know on the same day that start competition.
Take the risk!

Located in the Middle East and also known as the Syrian Arab Republic, bordering Lebanon, the Mediterranean Sea, Jordan, Israel, Iraq and Turkey.
Its capital, Damascus is one of the oldest continuously inhabited citys.
Over the last 4 and a half years, more than 200,000 Syrians have lost their lives in the conflict taking place in the country between forces loyal to the president and the forces of opposition.

Already considered the greatest humanitarian crisis of our time, the wave of Syrian refugees continues to grow. It is the largest exodus in recent history, more than 4.5 million Syrians have already left their country.
For behind, leave their homes and their belongings, they just bring the clothes they wear and little else. This exodus has increased significantly since 2003 when the living conditions deteriorated drastically. It is believed that half the population has been forced to leave their houses and the worst is that many of these people do not have access to aid.

Thousands of womens, mens and childrens, have now an uncertain fate, without prospects of future to a better life. The neighboring countries such as Jordan, Lebanon and Turkey struggles to accommodate the wave of refugees who every day come to their borders. 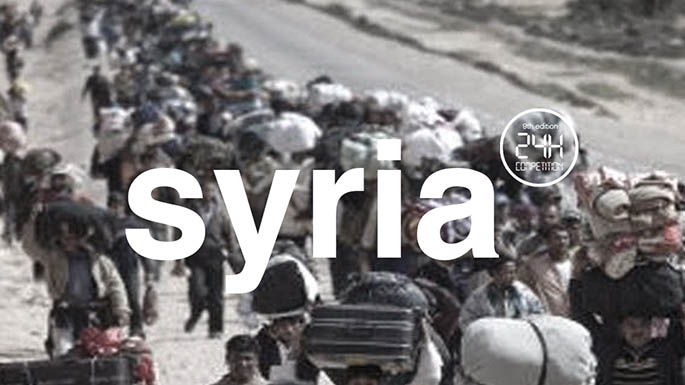