A House for David Bowie

David Bowie died. But he didn’t. We are going to revenge him, in the name of art, and in the name of his music. Let’s imagine A HOUSE FOR DAVID BOWIE!
How would it be…?
The many facets of his personality would have, no doubt, to be reflected in this house that wants to pay homage to him, architecturally.

Would it be an androgynous house…?!

Would it be a “chameleonic house” as chameleonic as its “inhabitant”…?

Would it be a house for a “defiant brawler”…?

Would it be The House of The Next Day…?!

It seems Bowie was under the sign of Hermes, so could we say that maybe this housecould equally be A House for Hermes…?!?

Yes, let’s place this house under the spell of MERCURY.

A Mercurial house…?! A “dark, brooding, beautiful and sentimental” house…?!

Would it be The House of The Blackstar…?!

If Bowie had an “outstanding ability to analyze and select ideas from outside the mainstream – from art, literature, theatre and film” maybe we should try to do the same… How else are we to serve Hermes, that is, David Bowie…?!

We no doubt have to confound, by uniting contraries… this is why perhaps The Androgynous House would be almost by definition A House for David Bowie… but how to design An Androgynous House…?!

If Philip Glass was right in stating that Bowie was capable of creating “fairly complex pieces of music masquerading as simple pieces,” then maybe a house for him should try the same… although a chameleonic house would have a hard time to be “simple”, even as a “masquerade”…

All in all, we ask you design a house with the built-in question “Where Are We Now?” to use the name of one of his many albums.

Please send us ANY work, ANY size and ANY format to: works@icarch.us. The deadline to receive your work is March 20th, the Spring equinox. There is no registration fee, but you need to register by February 1st in order to receive a registration number which will identify anonymously your work. In order to register please write to: info@icarch.us. There will be one prize: a paid trip to the Venice Biennale this year. 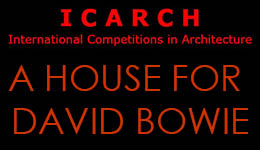