A HOUSE FOR HIERONYMUS BOSCH

A HOUSE FOR HIERONYMUS BOSCH – The greatest Medieval Dutch painter, as he was called… The Netherlands… Nether lands… or one of the great lands of painters. This small country gave to the world some of the greatest painters, and Bosch was / is one of them.

How could it be that at his time, he was able to create an art so very modern, almost alarmingly so…?! Could there be anything more “surreal” than his paintings…? Would indeed Surrealism go beyond what Bosch already conveyed…?

To design a house for Bosch, now at 500 years since his death, would mean to restore the power of the “SUR” in front of “realism.”

A theme worth exploring, we feel… and we regret from the bottom of our heart that Taller de Arquitectura’s “surrealist manifesto”, in which it glorified Magritte well above Mies, ended up corroded, fatally, by the oppressiveness of French Neo-Classicism, making Ricardo Bofill the very opposite of what initially he stood for.

Let’s explore it again, by the way of celebrating the great Hieronymus Bosch, this painter who activated Hell and Paradise, pictorially, in a supremely original manner.

Today, of course, our churches eliminate(d) depictions of Hell, as if Paradise was the only one worthy of visualisations.

But Bosch, like the great Medieval artists and builders, knew quite well that light without shadow is not possible, inasmuch as Paradise without Hell.

The circularity of Bosch’s vision is impressive, even now, 500 years after his death.

So how would an architecture inspired by Bosch look like…?

Maybe, in some respects, not very different from some adventurous depictions of human architecture on Mars…

Indeed, the “other-worldliness” of Bosch could inspire us to imagine the unimaginable…

So let’s do it. BE CRAZY! BE “MEDIEVAL”. BE SURREAL. BE OUT OF THIS WORLD.

THE MORE, THE BETTER!

Envision A HOUSE FOR HIERONYMUS BOSCH.

Half a millennium after his death.

But what is half a millennium in the field of art…? A mere second, at the most. Art doesn’t care about Chronos… and here lies its force.

BUILD FOR THE SURREAL BOSCH!

BUILD FOR THE SURREAL US.

BUILD FOR “THE OTHER SIDE OF THE STORY”, or, to use Frederik Kiessler’s language, BUILD AND IMAGINE A MAGICAL ARCHITECTURE.

Please send us ANY work, ANY size and ANY format and we will organize an exhibition, which we hope to be traveling. We will also publish a book with the best works received and we will display all the works received on our website. Please write to: info@icarch.us in order to receive a registration number with which to identify anonymously your work. The deadline for registration is August 1st, 2016. The deadline to submit your work is August 9th, 2016, exactly 500 years since Hieronymus Bosch’s death. 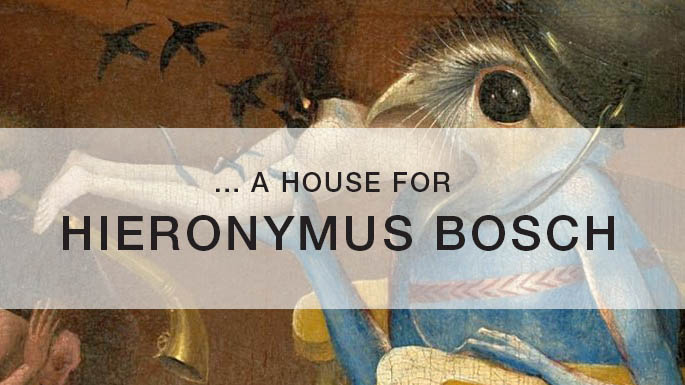