…a house for Odilon Redon

We can only be happy that Odilon Redon failed the entrance examination in the architecture school and that he dedicated himself to painting, printmaking, drafting. His brother became a noted architect, but Odilon remained to fight for the cause of NON-ARCHITECTURE.
Yes, maybe his paintings are the least “architectural,” since they depict the world of the shadows we call “symbols.” For us, deprived of myth, of its propensity for “the other world,” symbols do not exist, since they are too “otherworldly” to exist. But for Redon they existed, not as “certitudes” (how could they?), but as ABYSMAL INQUIETUDES.

We ask you to design THE HOUSE OF ABYSMAL INQUIETUDE.

THE HOUSE OF PSYCHIC SHADOWS.

A HOUSE FOR ODILON REDON, now that there were, this year, 100 years since his death, in July. And we apologize for being a little late. Plunge into “otherworldliness,” dear architect, that is, leave your architectural convictions outside the door… for once, at least! What kind of an architect would he have become, if he entered the Architecture School…?!

Probably a “strange” architect, most possibly, unemployed and unemployable… and most certainly, very unhappy and alienated.

Yes, perhaps, but only some of us have the courage to say it.

Like Baudelaire, for example, who sang his “strangeness” in the beautiful short poem in prose “L’Etranger.”

So please design A HOUSE FOR A STRANGER, dear architect, 100 years since such a “stranger” died. Design a diaphanous house, as diaphanous as Redon’s paintings and graphic works. A “mysterious” house… maybe a fragile house, since the symbolist Odilon Redon was very fragile, as his art shows us.

But his fragility has the power of dreams. He was THE PRINCE OF DREAMS, as he was called. And in 2005 the Museum of Modern Art in New York dedicated an exhibition to him called: “Beyond the Visible.” Indeed, this most “visual” of artists was actually, through his work, “beyond the visible…” Maybe just like Paul Klee, he lived with those not yet born and with those already dead.

Design such a house, NOT YET BORN AND ALREADY DEAD.

A HOUSE FOR ODILON REDON, the great “symbolist” painter.

As always, we accept ANY work, ANY size and ANY format. Please register before the deadline, to receive a registration number with which to anonymously identify your work, to be sent digitally to: info@icarch.us. The deadline is December 15th, 2016. We will display all the works received on our website and we will organize an exhibition with the best works. 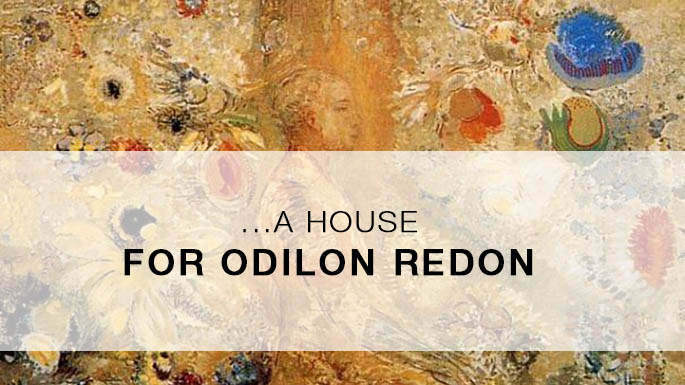