A HOUSE FOR WASSILY KANDINSKY

No doubt Walter Gropius was a special man. To invite a painter like Kandinsky to teach at the Bauhaus, showed vision and courage. What school of architecture would do something similar, now…?And, of course, Kandinsky was not the only one. Gropius was against specialization and against the specialists, who, he said, were merely repeating their mistakes over and over again… funny definition of the specialists.

But we are not celebrating Gropius now, but Kandinsky, this Russian aristocrat who revolutionized painting and who, despite the fact that painted in an “abstract” manner, wrote a book about “The Spiritual in Art.”

Inasmuch as the founder and director of an architecture school, today, would have a hard time inviting painters to teach in his school, it would be hard to find a successful contemporary painter advocate the cause of spirit. The very word, indeed, seems to be taboo, quite often, these days.

But while a painter like Malevich, himself concerned with “spiritual matters,” influenced shining stars of today’s architecture, not so much Kandinsky, although his chromatic vectors and snakes would seem quite appropriate for our time.

Maybe the fear of Expressionism made his influence, in architecture, less probable.

Anyway… how would A HOUSE FOR WASSILY KANDINSKY look like, now…?

It would have energy… an aristocratic energy, if we can imagine something like this… since rebelliousness is rather associated with the proletarians, an aristocratic rebelliousness seems less legitimate, although, of course, there were great aristocrats who understood that between them and those less fortunate was a very thin line indeed.

So we invite you to imagine the house of an aristocratic rebel, a prince, in fact. And just because in Russia, at one time, there were many princes, this does not mean that the prince Kandinsky was less significant.

And as a painter, he was and is, a major figure of the Modern Movement.

Just imagine, studying architecture (and the related arts) having as an “instructor” Prince Wassily Kandinsky, not to mention Paul Klee, or Oskar Schlemmer, or Johannes Itten… to name just a few…

What a school, Bauhaus, in its early years…!?!

That creative effervescence that Bauhaus epitomized and Kandinsky illustrated so well in his own painting we would like to see reverberating through time in A HOUSE FOR WASSILY KANDINSKY.

With all due respect for Malevich, we feel it is high time for Kandinsky to influence and inspire architecture.

This is exactly what we are searching for, now, when we will celebrate 150 years since his birth, on December 16th, 2016.

We accept ANY work, ANY size, ANY format. The deadline to submit your work is exactly his birthday. To register, please write to info@icarch.us by December 1st, 2016, in order to receive a registration number with which to anonymously identify your work. We will publish all the works received on our website and we will organize an exhibition with the best works. 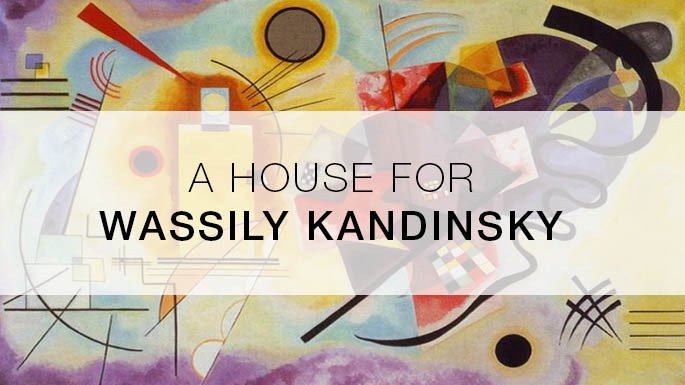