A Living Pedestrian Bridge Over The Nile _ Architecture Competition

Bridges in Cairo, in their diversity of construction systems, materials, scale, type and history are living proof of the ongoing debate between two world-views and two ways of life. Naturally the story of bridges in Cairo, and the world at large, started with the pedestrian or pedestrian-friendly bridges. Pedestrian bridges like Al Manasterly and pedestrian-friendly bridges like Kasr El Nil were certainly erected to facilitate the act of crossing the Nile from one bank to the other. To connect the east and west banks of Cairo. However, the act of physical crossing was not their sole aim. Such bridges were designed with clear intention and great sensitivity to the human scale. They are suspended oases that are capable of crossing the urban hustle and bustle into the tranquility and introspectiveness of the Nile.

Fast forward to the installation of motorway bridges and highways, which came with a clear bias. In favour of the motorised vehicle and everything it represents; an entire worldview based on speed, mass-production, mechanical efficiency and capitalistic definitions of productivity and welfare. Bridges, like the 6th of October Bridge, do have wide sidewalks, but the materiality, design and bridge furnishing (or the lack thereof) are evidence of the motor-based and mechanically utilitarian intent.

The spontaneous and instinctive response of the citizens of Cairo, to these two world-views, has been truly amazing. The old and young sit calmly and patiently with their fishing rods dangling down from incredible heights, while newly-wedded brides and grooms disembark their vehicles to pose for pictures with the Nile in the background. At the same time, sweet-potato carts and juice and flower vendors are just a few more examples of where the Caireans’ hearts are. For without much talk and through their individual and sporadic acts, they transform the most hostile, brutalist and utilitarian into a festival for life.

This leaves us with the question: If the people of Cairo are capable of inhabiting the seemingly uninhabitable in such colourful ways, what would the result be if bridges were designed in ways that take into consideration their zest for life?

Like the Nile it crosses, every new bridge in Cairo could potentially, depending on the design approach, be a connector enhancing the city’s multi-layered fabric or an urban edge that ruptures the city’s urban, social, characteristic, spiritual and historical continuity. The fact that Egypt is developing its new administrative capital tens of kilometres to the east of Cairo leaves the latter with a golden opportunity to regenerate itself and its millennial narrative into a better and more meaningful future.

The challenge is global and an opportunity to advocate an ‘alternative living’ agenda for the 21st century that is capable of addressing the ailments of the highly motorised cities of the world and introducing better solutions for every grand city around the globe.

Participants are asked to:

The solution should offer a seed for new ways of life across Cairo, and  potentially other megalopolises across the world. It should also be capable of identifying and regenerating interest in the existing activities on both banks, as well as suggest new activities, taking into consideration the entire context, which extends southwards to the Kasr El Nil bridge, where traffic could be reconsidered, and incorporates the corniche on both banks.

Participants are required to submit the following (in one zip file named after the unique registration number):

1 – One – A0 board in JPEG format. Every team is encouraged to submit all the information they consider necessary to explain their proposal. Content may include but is not limited to plans, sections, elevations, visualisations, diagrams, etc.  The resolution of the boards must be 300dpi with the unique registration number placed in the top left corner of the board in 18 pt font.

3 – Submit your entry by using the upload link in your registration confirmation email. 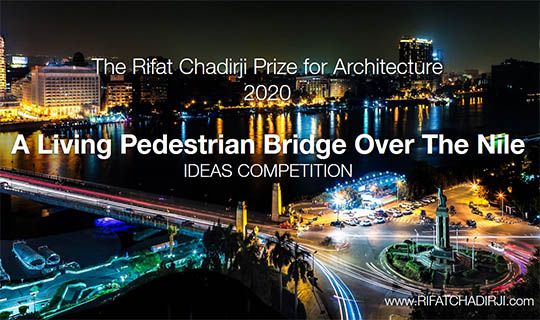