A Rehabilitation Centre for Terrorism Victims in Iraq

Human rights in Iraq remain fragile, as the country continues to emerge from decades of dictatorship, war and violence.

While the successive governments that have led the country since 2003 have taken measures aimed at improving the protection of their citizens, progress is still very slow due to the challenges facing the country.

The ongoing and protracted violence in Iraq continues to take a heavy toll on civilians and civilian infrastructure, subjecting them to senseless loss of life and injury. Violence also has a negative impact on economic development, and this in turn has a detrimental effect on other economic and social rights of citizens in Iraq.

The modern history of Iraq tells a dejected story of endless humanitarian crises, starting with the Iraq-Iran war (1980-1988) and the first Gulf War (1990), which were followed by the invasion of Iraq in 2003 and a long season of terrorist attacks by sectarian militant groups.
​
Wars had grave consequences and negative impacts on the Iraqi community and economy. It created an environment of turmoil, lacking the very fundamentals of human rights and infrastructure.
It is estimated that since 2003, there have been over 335 billion dollars in financial losses related to conflict in terms of weapon purchases, human casualty and disability. According to START statistics, Iraq ranks first among countries that experienced the most terrorist attacks involving explosives.
​
A report issued by the Iraqi government in November of 2012 shows that between 2004 and 2011, there were 239,133 wounded Iraqis as a result of terrorist attacks within the country.

Although the number of terrorist attacks has relatively decreased in recent years, injuries sustained, mental and emotional trauma from these attacks are long term and can affect people for their whole lives

The Human impacts of these frequent terrorist attacks that targets Iraqi of all ages and backgrounds is not a historical problem but one that is current and on going – thus the need for rehabilitation centres is urgent.

​Verifying the exact number of dead and injured civilians as a result of ongoing violence in Iraq is difficult, according to the Iraq Body Count website (https://www.iraqbodycount.org/) and The United Nations Assistance Mission for Iraq (UNAMI).

Regardless of not having the exact number of victims, even the lowest estimation represents many ordinary Iraqis who continue to suffer at the deterioration of their basic human rights. This includes tragic loss, injury, death and destruction. Ongoing violence is likely to continue to claim a large number of civilian lives in the near future.

​Such deliberate targeting of civilians and attacks on civilian objects constitute serious violations of the law, and such acts also constitute crimes against humanity, a violation of the right against arbitrary deprivation of life, as well as a violation of other basic rights.

In Iraq for every one fatality of terrorist attacks, there are approximately three injured victims – most are innocent citizens who become a soft target for militant groups.

Those who survive these brutal attacks live irreparably damaged lives, often taking years to reconcile their losses and traumas and to recover from their physical and/or psychological injuries. As a result of these tragedies, there is a growing need for centres in Iraq that support an interdisciplinary course of rehabilitation, providing optimal conditions for treating survivors of terrorist attacks physically, psychologically and socially.

These centres are for rehabilitation and not medical treatment, the rehabilitation centre should feature healthy and safe environments that work positively to achieve the potential of the injured person in a way that is constructive and realistic.

Rehabilitation is long term and oriented to positive life activity, and considers the whole person. The rehabilitation centre should provide extensive rehabilitation to the injured person and give them a feeling that they have control over their lives again by assisting them in better understanding, coping with, and processing the emotions and memories tied to traumatic experiences. The centre should also train the patients and build their capacity to develop their skills and confidence to rejoin society and the job market.​

Architects, students, engineers and designers are invited to participate in this competition.
Participation can be on an individual or team basis (maximum of 6 members per team).  We encourage the participation of multidisciplinary teams. 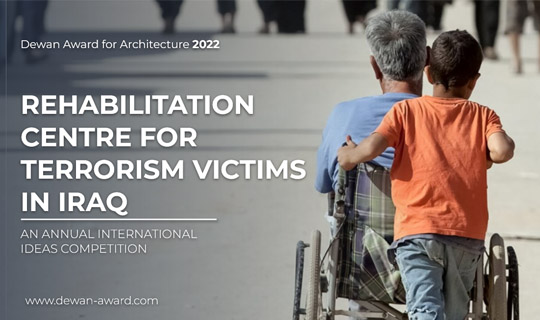