In 2019 we celebrate the 500th anniversary of Leonardo da Vinci’s death. This year also marks Moon landing’s 50th anniversary. Today more than ever, we must find new forms of habitat and mobility, new ways of life that have to be inventive and efficient for the 10 billion people who will be living on earth in 2050, 75% of whom will live near shorelines and will be therefore particularly concerned by the challenges of the sea level rising. Prospective works on living in space has never been so ambitious. We must act to preserve and build the future of humanity in a sustainable way.

To succeed in it, we must dare! In 1869 Jules Verne published “Twenty Thousand Leagues Under the Sea”. He was deeply convinced that “Anything one man can imagine, other men can make real”.

In 2019 for its 9th edition, the Jacques Rougerie Foundation invites you to imagine bold, visionary projects in accordance to the major issues of humanity. The human being must be at the center of your project. It will be based on biomimicry which is an infinite source of inspiration: nature designs the most beautiful curves, forms, and provides the best materials. From the origins, nature has been designing and providing the best patterns. A transversal and multidisciplinary work will be appreciated.

Architects, engineers, designers, seize, the opportunity to create tomorrow’s ways of life, to promote the richness of the sea and space, as well as pay respect to them.

You want to commit yourself by proposing architectural projects on the Ocean or Space? You are aware of the high stakes of the climate change? You are sharp and sensitive. You feel responsible for the future of the humanity and want to build a world preserving the biodiversity and the common good. 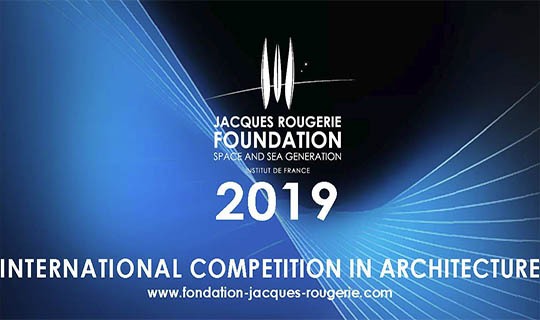