The Acropolis is the symbol of Athens, an imposing rock spur used in archaic times as a defensive bastion. In the 7th century its militaristic area became the place to celebrate the gods: the construction of the Parthenon, the Propilei, the Eretteo and the Temple of Nike Athena are worth the UNESCO heritage site. The agora, on the other hand, represented the commercial and political hub of the city where all the most important Greek philosophers were. The millenary history of Athens has not stopped renewing itself over the centuries; the streets of the ancient city are often scenarios of political-administrative conflicts. In this atmosphere filled with meanings we want to imagine an architecture capable of translating instances of the past into new contemporaneity.

The terrace for the Acropolis will be a multifunctional center – restaurant, auditorium, exibition hall – near the Parthenon.

The winners will be announced on the website of the Association no later than the date of 08th of January 2018. Will be deserving the first three works as well as any other projects which are not excluded special mentions. #The winner will receive a prize of 500,00 euro (excluding TAX) for each participant. #Top three finishers will have an annual subscription to the DOMUS magazine in digital format. #The winners and mentioned might take part for life at all our future competitions that we will propose on our portal. 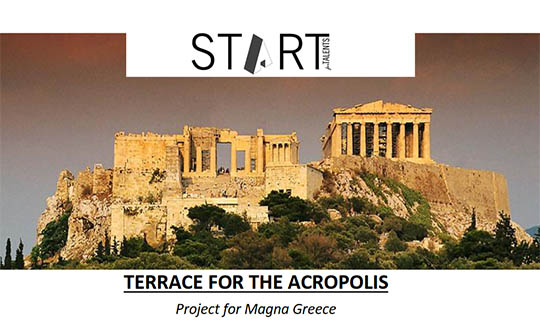