San Francisco is the fourth largest city in the State of California, with a population of around 860,000 distributed over 121 km2. It is located on the West Coast of the United States, on the north end of the San Francisco peninsula, with the Pacific Ocean to the west and connected to the mainland to the south.

San Francisco is one of the most important cities of the United States, one of the most well-known cultural, technological and financial centres of California, at the leading edge of research in biotechnology and biomedicine, where the opportunities generated by the internet revolution continue to attract residents and skilled workers with high salaries. It also welcomes more than 16 million tourists a year, drawn by the iconic image of the city. Its music, cinema and monuments are recognized around the world.

It was in 1849, during the California Gold Rush, when the small trading post known as Yerba Buena became the incoming port for numerous ships transporting thousands of fortune hunters from all over the world. The population grew from 400 to 25,000 residents in just one year. The promise of great fortunes was so tempting that the crews of the arriving ships deserted them and hurried to the gold fields, leaving the Port of San Francisco filled with ghost ships. Mud and gravel was dumped into the bay due to mining activity, extending the boundaries of San Francisco 10 blocks out from its natural border.

With the outbreak of World War II, the port became a military logistics centre involving nearly all the piers, with ships and troops and warships docked all along the Embarcadero. After the war and the arrival of container ships, commercial traffic moved to the Port of Oakland, thanks also to the construction of the Bay Bridge. The piers fell into disuse and were relegated to storage or abandoned.

Today, the north-eastern shore of San Francisco has been reborn as a walking path flanked by palm trees and with a trolley, where numerous piers have been transformed into restaurants, office buildings and commercial areas. There are plans to build a museum, a cruise ship terminal and other services and attractions for residents and visitors.

The objective of this competition for students of architecture and young architects, Bay Book House (BaBH) San Francisco, consists in proposing a space for cultural exchange that will activate one or several of the unused piers of the historic Port of San Francisco.

Thanks to its privileged location, the proposed space will seek to become an international  meeting point for students and researchers, as well as for lovers of culture and general knowledge, where consultation, open-air reading or technological innovation will attract inhabitants or visitors.

The BaBH aspires to be the future of traditional libraries, an evolution in the how we understand, use and enjoy this source of knowledge, a museum of (not) books adapted to today’s world, and where culture becomes a unique sensory experience.

In a city filled with iconic images known around the world, this new space should become the new cultural reference of San Francisco, the flagship of the strong shoreline that is currently flowering. 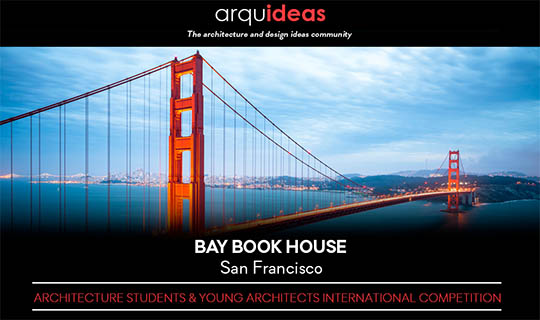