Berlin is the 21st century contemporary world’s ideal capital. The city left its torrid history behind to quickly grow and cement itself into the intellectual and cultural core of the world. Berlin is the epicenter of any new movement that starts to demolish the old-world order. Ever since the wall came down in 1989, Berlin has been known as a bohemian paradise, a place where the empty spaces between east and west could be pioneered and inhabited by the most creative types, who could create and carouse with impunity.

Bohemianism is the practice of an unconventional and an alternate lifestyle, often in the company of like-minded people and with few permanent ties.  Bohemians are considered to have very different tastes in music, fashion, art and literature. Bohemians are all sorts of wanderers and adventurers who very significantly converge in Berlin and its underground art districts to create, discuss and share new ideas and bond with each other.

Berlin is cheaper to live than most big cities today— so artists have more time to put creative energy toward their visions, and they can take the financial risks that are necessary when making art, i.e. starting projects or showing their work in a new space. Because of the fact they can live cheaply and have more free time, artists in Berlin tend to be very active and thriving.

The competition seeks the creation of a contemporary, edgy and quirky hostel in the city of Berlin that redefines the idea of co-living. The aim of the competition is to create an innovative architectural and spatial environment that enhances the experience of the traveler and breaks away from the conventional building typology of travelers’ hostels. The hostel should strive to create a new space that emphasizes on people-oriented design in behavioral terms as they interact and use spaces and embodies the bohemian way of living together.

The competition encourages participants to change their conventional narrative towards hostel design and create an interesting, fresh and unorthodox vision for the living spaces of the future.

The Kunsthaus Tacheles is an iconic site in terms of its historical and present-day importance. Originally a Jewish quarter that also served as a Nazi prison during WWII, it was taken over by artists who developed workshops, studios, galleries, cinemas etc. in the old building and covered its façade with graffiti and murals. The district comprises of a large open area that is home to a lot of installations and pavilions designed by artists from all over the world. The proposal should respect the ephemeral nature of the site and the spatial impermanence of structures around it.

The hostel must become an important landmark for the district and an architectural icon that attracts more and more people. The co-living space should become a strong reference point that would generate interest from not only the travelers and artists but from locals and general public who will be spectators and third party to the bohemian way of living.

You can download the detailed briefs (including other information and reference material) by clicking on the DOWNLOAD tab at the bottom of this page.

All the questions related to the competition can be mailed to us at queries@archasm.in with ‘FAQ’ as the subject. All the participants are recommended to check our FAQ section by clicking on the ‘FAQ’ button below. All the relevant information about the competition will be updated here regularly. 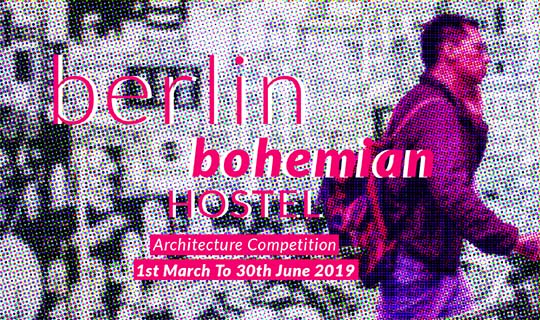