Berlin is Germany’s capital and cultural centre which was divided during the Cold War, but today known for its art scene, festivals, nightlife and modern architecture, such as Mies van der Rohe’s landmark Neue National galerie. The 18th century Brandenburg Gate has also become an iconic symbol of reunification of the city and Germany.

It is a world city of culture, politics, media, and science with an economy based on hightech firms and the service sector, encompassing a diverse range of creative industries, research facilities, media corporations, and convention venues. Over the last decade Berlinhas seen the emergence of a cosmopolitan entrepreneurial scene.

Gourmet Street food refers to highest quality and excellent flavored balanced meals, prepared well with good ingredients and somtimes quirky and a twist or new offering from the norm but with quick turnaround served on the street or outside the restaturants environment in special trucks or temporary and sometimes mobile food cabins.

AIM OF THIS COMPETITION
The aim of this International Competition is to design a Gourmet Street Food structure in the heart of the city of Berlin. The architecture of this new temporary structure or vessel should reflect contemporary design tendencies in its provision of an architectural solution to the current gourmet street food scene. The proposal must not only attend to the specific function but also take into consideration the urban context and impact. This competition hopes to achieve the following:

_Encourage and reward design excellence at a small scale which integrates function, structure and details.
_Research, respond to and highlight the unique aspects of designing a temporary self-support and possibly a mobile structure.
_To generate the discussion of ideas regarding the relation between Architecture and the new Gour- met Street Food trend.
_Encourage the employment of sustainable design in all aspects of the proposal.

COMPETITION STRUCTURE
This is a single stage Competition with the aim of identifing the most appropriate proposal, which best satisfies the general and specific objectives of the contest. THOSE

ELIGIBLE TO PARTICIPATE
Architects, Architecture Graduated, Engineers and Students. Interdisciplinary teams are also encouraged to enter the Competition.
Submissions can be the work of an individual or a group up to 4 members and there is no age limit.

Note: this is an open international competition hosted by [AC-CA] to generate progressive contemporary design ideas.There are no plans for the Structure to be built. 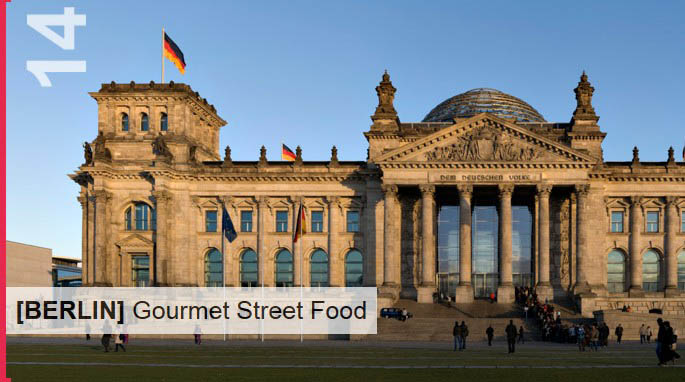