Big Ideas for Small Lots NYC is a two-stage design competition for small-scale, urban infill housing. The competition is organized by the New York City Department of Housing Preservation and Development (HPD) and the American Institute of Architects New York (AIANY), and seeks to address the challenges associated with the design and construction of affordable housing on underutilized City-owned land.

In November 2017, Mayor Bill de Blasio announced the Housing New York 2.0 plan, which builds on the success of the original Housing New York plan and furthers the City’s bold commitment to increase the supply of affordable housing by building or preserving 300,000 affordable homes by 2026. In support of the plan, HPD has aggressively moved through its inventory of vacant and underutilized City-owned land to create more affordable housing.  Much of the remaining inventory includes lots that are challenging to develop due to their small size.  Big Ideas for Small Lots NYC is a design competition to find housing solutions for these lots, and to explore their potential to contribute to citywide affordable housing options.

The design competition seeks proposals with the goal of:

Finalists for Stage I will be awarded by AIANY a monetary stipend in the amount of $3,000 and invited to participate in an exhibition and panel discussion at the Center for Architecture. HPD will organize a series of workshops and networking sessions for finalists, in conjunction with AIANY, to facilitate the formation of development teams and aid finalists in developing their Stage I submissions into site-specific proposals. HPD will choose to designate one or more development proposals formulated in Stage II to be developed for affordable housing on City-owned land. 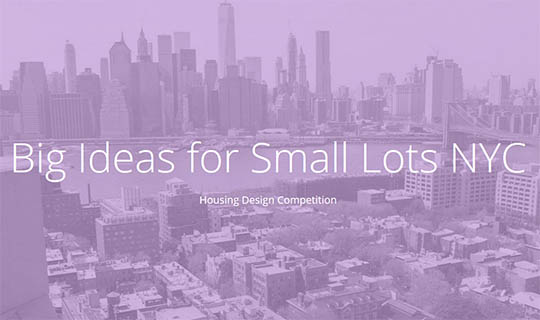