If you had a chance to design Black Rock City, what would you build? This is an international design competition to explore new spatial and geometric possibilities for the city. Every year there is a new theme, new art, and new people, but the city plan is always the same. The existing plan has served the community very well, but by creating new city plans, we can create a new world every year. Urban planning is just as much a form of art as sculpture so why not explore what is possible? Who knows what weird and amazing city is waiting to be born?

The competition will be organized in two stages. During the first stage, entrants will submit a single page drawing, sketch or rendering of their design, along with a brief statement about its intent and ideas for further development. The goal in this stage is to identify promising ideas for further development, so these proposals needn’t be especially detailed. The entries will be displayed online for a public vote. The top ten entries will then advance to stage two.

In stage two, entrants will be invited to develop detailed street level designs, with an emphasis on traffic flow, logistics, and safety considerations. These designs will again be put up for a popular vote. The designs, along with the voting data, will be published and formally submitted to the Burning Man management team for review. The final choice of design will rest with them based on a combination of popularity, logistics and space considerations (including the option to retain the current city plan)

Eligibility
This is an international competition open to anyone.

Technical Criterias
Entries should conform to the following basic criteria:

Safety considerations are likely to be a important factor in the finalist stage, so emergency services can easily find and reach people in need of help. Symmetry, repeating patterns and easily understood coordinate systems will be important.

Timeline
Stage one of the competition will take place in the Fall of 2015. Registration is open now, with schedule details to be announced later this summer.

The second stage of the competition will run from January to May 2016, at which time the finalist designs will be formally submitted to the Burning Man management team for review.

The new city plan would be implemented in 2017, to allow a full year of preparation. Meanwhile, a new competition cycle would begin after the 2016 burn.

Organisers
The Black Rock City Ministry of Urban Planning (www.brcmup.org), which is a group of long-term burners, camp organizers and artists who want to explore new spatial and geometric possibilities for the city, and to provide artists and scientists with a platform to share their ideas. 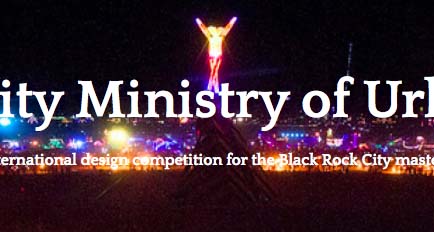