As part of our 2017/18 research theme discussing the infrastructural implications of the United Kingdom’s withdrawal from the European Union, the school has launched an international architecture competition entitled ‘Brexit Monuments’.

The Eurotunnel (providing rail services connecting London to Paris and Brussels), constructed between 1988 and 1994 is an important example of european infrastructural co-operation that emerged from a political ideologue that appears to become increasingly distant, or even impossible to imagine today.

‘Brexit Monuments’ proposes an architectural engagement with this particularly loaded political issue, a monument to Brexit, located next to the Channel Tunnel entrances in either (or both) France or the UK and visible to travellers using the Eurostar service between London and Paris.

The competition brief is straightforward; to design a monument, architectural structure, or piece of public art that discusses the themes of lost European co-operation.

However, the issued raised in these topics can be highly political and even emotive, and entrants should be fully aware of the implications of their proposal.

There are many examples of such projects, where architectural object become landmarks adjacent to transport infrastructures.

Your proposed monument may be constructed from any material.

Although this competition has been designed to provoke thought and debate around this topic, the School is able to fund the construction of a modest design, not in excess of €20,000, subject to the agreement of landowner(s) of the sites proposed (note that any sites selected that are owned by either the British or French States or Eurotunnel will not be taken forward.  There are a number of private landowners (predominately agricultural) that would be more suitable.

Any implementation will also be subject to local planning and building regulations.

If permission cannot be obtained, the monument will be constructed at the School in Paris.

There are no restrictions on height, footprint, materiality, form, or longevity of the proposal. 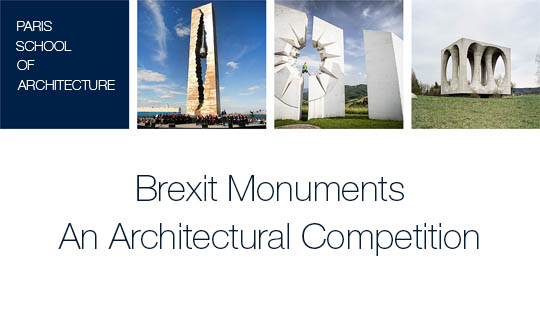