Call for Submissions: OTHER SPACES

Other Spaces is calling for contributors to submit material which explores the opportunities of terrain vague as a consequence of our fluctuating urban environments. Solà-Morales’ term terrain vague can be translated in English as urban wastelands. This is not a new concept, and it is not localised – it is a global phenomenon, which often occurs as a result of the expansion and contraction of our cities. Due to fluctuating political, social, and economic conditions, our cities exist in a constant state of physical transformation. As such, terrain vague is shaped by the structures of our cities, while it also presents us with the residue of a moment in time.

This global phenomenon results in a trail of inequalities but also possibilities for recycling, reusing, rewilding and reactivating. Our cities are littered with underutilised spaces which have the potential to become urban platforms for temporary interventions – politically, environmentally, and socially activating our communities, and connecting these spaces back to the city and its people.

Temporary activation of space has the power to build social interaction and connection with place, while experimenting with ideas for the future use of land.

The exhibition looks to raise the following questions, among others;

Other Spaces is a virtual exhibition which explores the potential of terrain vague – or urban wastelands – within our cities. This exhibition will gather ideas, proposals, and critiques which look specifically at temporary interventions to activate or make use of urban wastelands. The exhibition intends to question the life cycle and future of our urban environments, prompting further discussion within the discourse.

The exhibition will look to curate a sample of proposals, built and hypothetical, that address this issue on both a local and international scale. This exhibition will give designers, architects, artists, urban planners and thinkers a forum to present ideas and propositions for the future of urban wastelands.

This event is part of Melbourne Design Week 2022, an initiative of the Victorian Government in collaboration with the National Gallery of Victoria. 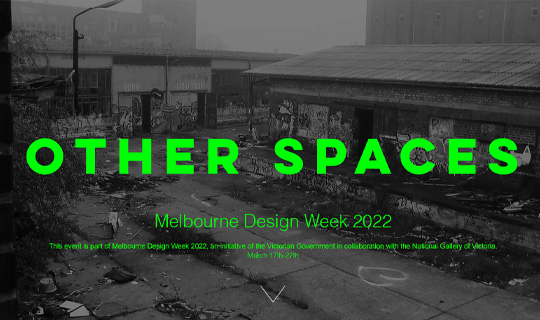