Fifth edition of this international competition organized by OPENGAP, inviting participants to explore the boundaries and paradigms of house designing, inciting them to work in innovative and visionary proposals which can both, think in a basic housing program and in the relation of  identity between the customer and  the project.

Each participant or team can propose the client for designing a house, a person of interest and inspiration for the project.

This competition is open to all architects, designers, architecture students and to people around the world interested in the topic. Competitors could subscribe individually or as a team of maximum of 5 people.

The proposal submission consists of two digital panels in .jpg format, not bigger than 5MB each.

This competition of ideas does not specify any particular site or setting. Therefore, each contestant or team will be able to choose the location of their project. The project in question may involve the design of a new space in any chosen empty plot, or may be a proposal of how to reuse an existing building or structure.
Nevertheless, participants will have to justify their choice of location for the project. Since one of the aims of this competition is to search for heterogeneous proposals and various possible

• The only limitation as to the dimensions of the project is that the house must have a max construction area of 800m2 total. This surface may be distributed in any way, in several floors, on one level or in multiple volumes.
• As this is a call for architectural proposals, it is important that the function and relationship of spaces within the project are resolved and represented in the proposal.
• As this is an academic competition, we are not searching for a profound technical and construction detailing. A good architectonic
conceptualization and original ideas will receive the greatest consideration. Opengap encourages contestants to experiment and to formally and spatially explore new solutions. Original, creative, contemporary, and risky proposals,

AWARDING OF PRIZES: During November, 2017 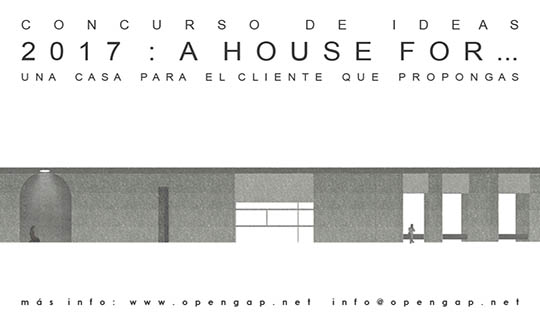