Complicity and Defiance in Architecture

Architecture is historically complicit with the policies of those in power, both symbolically and functionally. It offers not only representations of power, but also vehicles for enacting power in its most grandiose, oppressive, and physically enduring expressions, from palaces and corporate skyscrapers to border walls and prisons.

Art that opposes power, on the other hand, is more fluid. Graffiti, protest songs, and written manifestos cost nothing and are easily disseminated–all things that architecture has historically never been. As such, there is no canon of activist built architecture. And while there have been revolutionary movements and utopian visionaries in the history of architecture, only now through Photoshop and the internet can an architecture of protest and revolution truly form and proliferate, through imagery that is arguably more provocative in imagined scenarios than built projects in their real-life executions.

We are only a few weeks into his presidency and Donald Trump has already taken steps toward his promised authoritarian legislation: enacting an immigration ban, threatening existing allies, ordering the construction of a border wall, deregulating banks, attempting to repeal universal health care, reproductive rights laws, and years of environmental protection. These displays of power mongering have sent shockwaves through the design community and have already sparked debate about complicity and defiance.

Through original design or borrowed content, we want you to create one architectural image that communicates a clear and provocative message of critique and/or defiance towards any one of President Trump’s authoritarian legislation measures. Now is the time for architects to act, and in this era of digital and social media, and interactivity, creating high-powered visuals (our specialty) is the only way to communicate. Within this mashup culture where reposting, reblogging, and retweeting meet fake news and alternative facts is the opportunity to modify and subvert prevailing tendencies. These dynamics can be harnessed for the worse, but with your help, we can use them for the better.

Registration is a flat fee of $50. One entry will be accepted per registration. Group and individual entries are accepted, but only one entry prize will be awarded per each valid registration. Email your submissions to the Reality Cues Librarian (librarian@realitycues.com). 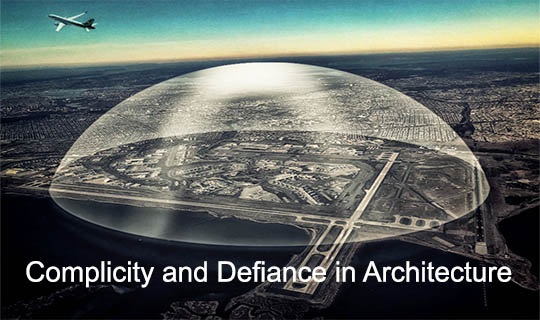