Abu Dhabi Department of Municipalities and Transport (DMT) announces the opening of an international design competition called “Cool Abu Dhabi,” an open-invitation contest intended to source creative global ideas for dealing with climate change and the urban heat-island effect in one of the most challenging climates on earth. The competition is open to all; but is specifically looking for designers, architects, engineers, landscape architects, material scientists, educators, researchers, students, artists and/or interdisciplinary teams from across the globe.

The winning entries will represent the most original and innovative ideas that attempt to reduce heat island effect in a prototypical urban site in Abu Dhabi through design interventions or material and scientific innovations.

Outdoor thermal comfort conditions influence several choices that inhabitants make every single day — to walk to a local shop, take public transit, cycle, eat outside at a restaurant, talk with colleagues, friends, and neighbors or simply go to a park. One of the critical issues in designing outdoor spaces is considering human thermal comfort. Making people more comfortable allows them to enjoy and spend more time in outdoor spaces and be a part of a thriving city. Improved thermal comfort in public spaces not only results in less time spent indoors and consequently, reduced energy consumption but also valuable outcomes emerge such as wellness, enjoyment, and safety. It helps develop a sense of belonging, an identity for the design and increases peoples’ level of satisfaction.

For an extreme climate such as Abu Dhabi’s, the harsh conditions felt across significant months of the year certainly reduce the feasibility of such external activities taking place. It restricts peoples’ choices and impacts subsequent health outcomes.

Due to the Urban Heat Island Effect, the city center of Abu Dhabi is estimated to be several degrees Celsius warmer than the surrounding natural environment. Solar absorption and re-radiation from the surrounding context, including swaths of asphalt parking, existing surface materials, the heat released by automobiles as well as the anthropogenic heat released by cooling the buildings, and lack of air movement result in felt temperatures being much higher than the prevalent air temperature.

Throughout the year, Abu Dhabi experiences a wide range of thermal stress levels typically between ‘comfortable’ (9–26°C) to ‘extreme heat stress’ (above 46°C). The majority of ‘very strong heat stress’ (38–46°C) and ‘extreme heat stress’ (above 46°C) occurs between April and October with the most comfortable conditions occurring between October to April. While it is highly desirable to improve thermal comfort throughout the year, this competition requires the respondents to focus on the shoulder months of May and October for their interventions.

For public space comfort, ‘moderate heat stress’ (27–32°C) is considered acceptable. It is important to note that temperatures presented are not air temperature, but Universal Thermal Climate Index (UTCI) equivalent temperatures; air temperatures are typically lower than the UTCI. UTCI provides a means of illustrating thermal stress through a scale that measures the heat or cold stress. It is based on a combination of weather variables (Mean Radiant Temperature, Dry Bulb Temperature, Relative Humidity, and Wind Velocity), the clothing insulation value and the metabolic rate based on the type of activity taking place.

The prize-winning competition entries shall holistically address the above challenges, more specifically Heat Island Effect through design, engineering, scientific, anthropological, and material and planting propositions. While maximising passive means is preferred, rational use of efficient active and mechanical systems for public space comfort is strongly encouraged.

Climate sensitive and people-centric approaches should form the core focus of the design. In addition to the technical dimension of the intervention, and its aesthetics should also drive people’s desire to interact and occupy public space. 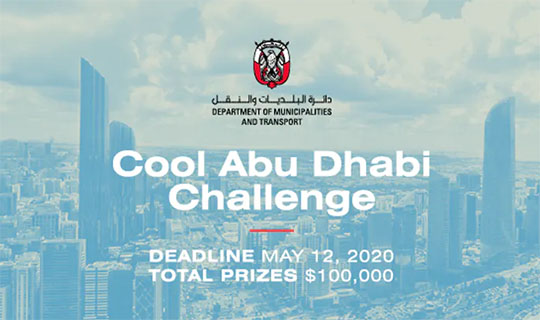