For a second year the Costa del Sprawl ideas competition seeks creative solutions to improve the social, urban, and architectural situation in some of Costa del Sol’s sprawling neighbourhoods. This year’s competition is focused on the theme of ‘identity’ and invites participants to imagine a piece of architecture, whether building or space, which could be adopted as a model of contemporary vernacular architecture specific to the area of Riviera del Sol, and act as a precedent for the future planning and development of the neighbourhood.

Andalucía contains an exciting variety of vernacular and contextual architecture which has grown throughout its tumultuous history and within its diverse landscapes. From the labyrinthine streets of medieval fishing towns and gleaming white walls of hillside villages, to palatial citadels and capitals of once mighty empires, the architecture of Andalucía tells a compelling story and creates a strong sense of place and identity.

This sense of identity and reflection of context has all but vanished from contemporary architecture in Andalucía, and this is most notable in the sprawling neighbourhoods of the Costa del Sol which communicate little more than the capitalist speculation which lead to their existence. Nonetheless, this condition now forms a part of the area’s history and provides the point of departure for any future architectural, urban or planning projects.

It is this point of departure which forms the basis of the ideas competition. Participants are asked to produce a design which communicates their idea of contemporary vernacular architecture for Riviera del Sol. Designs can be can be experimental or based on the tried and tested, but they must all look towards the future as well as take into consideration the social, cultural, topographic, climatic, urban and architectural context of Riviera del Sol in a holistic manner.

More specifically, you are asked to design a building, a fragment of a building, or a space which could be used to influence and shape the future of architecture and planning in the neighbourhood of Riviera del Sol. The designs should be located on the piece of land between Calle Jose Rivero and Calle Severiano Ballesteros as identified on the map. It is up to you to decide how much or little of the site you use and the location of your design upon it. The scale and typology of the design is also free for you to decide as the focus of the competition is to imagine a new vernacular, although this should not be interpreted merely as a stylistic study; the way in which your design is inhabited, the atmosphere of the spaces, and the materials and manner in which it is constructed will all be taken into account in the judging process.

This competition is open to everybody. To enter, each team/individual should submit a single A3 PDF named [project title].PDF and completed project submission form by email to costadelsprawl@gmail.com before the deadline of 23.59 GMT on Thursday 31sth August 2016. The combined size of attachments should not exceed 5mb. Submissions can be in English or Spanish.

Shortlisted designs will be exhibited as part of the Costa del Sprawl exhibition at La Cala de Mijas municipal gallery where they will be presented to local residents, council representatives and neighbourhood associations who will vote for a winning entry. 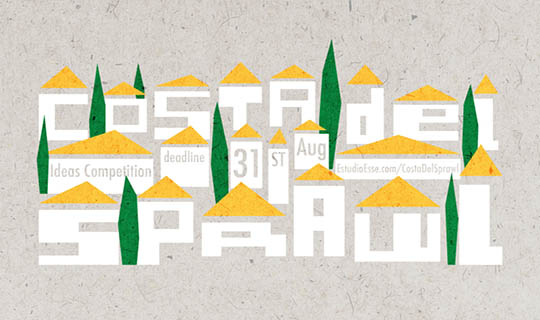