Architecture can be as simple as one wants it to be, or as complicated; from the minimalist designs of modernist architects to the ever so fluid designs of the late architect Zaha Hadid; From the skyscrapers in New York, to a beautifully stylised streets filled with European or Islamic architecture; each and every structure has its own beauty.

But one thing is common amongst them all. No matter how simple or complex the structure is, it is made up of a composition of one or more architectural elements.

These architectural elements are what form the basis of even the most complicated designs. And it is these elements that’ll be the focus of this series of competitions.

The Arch is arguably one of the most important architectural elements. In fact, the word “Architecture” starts with the word “Arch.” Hence, this is going to be the first one of the design elements that we’ll be focusing on.

Arches have been a part of architecture since a time immemorial. Some forms of arches are said to have been found dating as early as the 2nd millennium BC. From ancient Roman empire, to Mughal architecture; from great churches, to great mosques and palaces, arches can be found in almost all kinds of architecture spread throughout the world. Even a lot of modern-day memorials have arched forms, either as decorative elements or a structural component.

And that is the best part of the Arch, it serves as a brilliant example of both. In many structures (especially historical ones), arches were one of the most intricately decorated elements of a structure. And the way an arch acts as an important structural element should be pretty well understood by any architect (or student).

The aim of the competition is to design a functional building or a structure whilst highlighting the design element of the arch in the best way that you can. The arch should be the main element that is highlighted in your design, your idea, or your concept.

The meaning of functional building/structure, is that the building should serve some tangible function and should not be a simple representation of a huge arch in the middle of nowhere. It might be a simple monumental arch, if you can justify it. Remember, in architecture, it is possible to go slightly against the brief, given that you can justify your decision with logical arguments and reasonings.

Note: Bulk registrations were added as an incentive for architecture students and studios who wanted to take the competition up as a studio project. Hence the fees were reduced to half than what it would’ve been if registering as an individual.

Although it was added for students, bulk registrations may be used by anyone, even professionals.

Vaults are often considered as extensions (or extrusions) of an arch, and it is often difficult to distinguish between the two. Hence, you are free to use vaults and arches interchangeably (or together) as and when required in your design proposal.

You may construct a structure for any purpose deemed fit for the modern-day society. From a simple memorial, to a huge skyscraper or a palace; any building type is acceptable, as long as you’re able to justify it on your competition entry sheet.

IMPORTANT TIP: Do a research on “Arches” before you start coming up with design ideas. We’ve often seen design competition entries which are nothing more than rendered 3d structures; and lack even the slightest of research or concept behind the design. 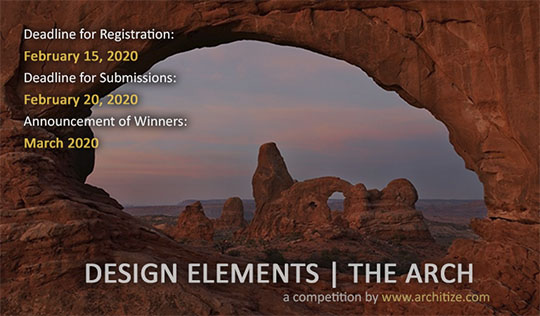