Over the past decade, the Detroit Institute of Arts (DIA) has become internationally renowned for making humankind’s greatest artistic achievements accessible to all. “Wonders of the Ancient Middle East” are used to illustrate technological innovations that shaped the world we know today. Diego Rivera’s iconic “Detroit Industry” fresco murals become animated via an iPad tour. Throughout the museum, art comes alive through universal stories told in a conversational tone. The Wall Street Journal hailed the DIA as “the world’s most visitor-friendly museum” in 2015. However despite the success inside the museum, visitor experiences on the exterior spaces that surround the museum tell a different story.

Presently, the 4-acre front plaza and grounds receive little public use outside of major events, even though it is situated in one of the most vibrant areas of the city. Potential visitors have described the exterior and grounds as “impermeable” and “standing separate from our community.”

Sitting adjacent to the DIA are a significant set of cultural assets including the Charles H. Wright Museum of African American History, the College for Creative Studies, the Detroit Historical Museum, the Detroit Public Library, the Michigan Science Center, University of Michigan, Wayne State University, among others, who also share a desire for greater connection to the community and to one another. With the Detroit Institute of Arts’ Plaza project as an anchor, we are inviting designers to imagine inspired possibilities for stronger connections between Midtown’s cultural and educational institutions. We ultimately hope to create a district that will be inviting to all of metro Detroit and its distant visitors, and where people will be happy to linger outside, walk from place to place, as well as come within.

This design competition centers around enhancing and enlivening the DIA’s exterior campus, and seeks an outstanding integrated design team for developing an urban and landscape design strategy and connection framework. First, the team will be asked to create a strong and innovative design vision that reimagines the DIA’s grounds, making them highly visible, welcoming, flexible and functional to support year-round outdoor programming. Second, the team will take elements from the DIA design and extend them beyond its grounds to physically connect to the surrounding institutions to encourage walkability, add wayfinding, identify other areas for public art and programming, while also considering shared parking strategies and improved design. Ultimately, this project presents an opportunity to unify the cultural district in a triple bottom line fashion: one that creates physical and organic connections between the institutions, equitably engages residents and visitors, provides opportunities for local businesses, manages stormwater, generates new or increased revenue streams for the museums, improves walkability, and adds beauty to the area.

We are aware that this project is complex. The stakeholder institutions are committed to working together and are actively engaged in the process of developing a grand vision for the district. An extensive civic engagement process will also feed into this process.

THE COMPETITION
This competition is a three-staged selection process to choose a world class landscape architecture and/or urban design team to realize the vision of a gathering place that welcomes everyone and establishes connections between our arts and cultural institutions—inspiring an inter-connectivity between our institutions and our citizens.

No design is required at the first stage. Competitors are invited to electronically submit their qualifications. The deadline for this is: 12:00 EDT, Monday, April 30, 2018.

This design competition is co-led by the Detroit Institute of Arts and Midtown Detroit, Inc. For more information, please check out: midtownculturalconnections.com. 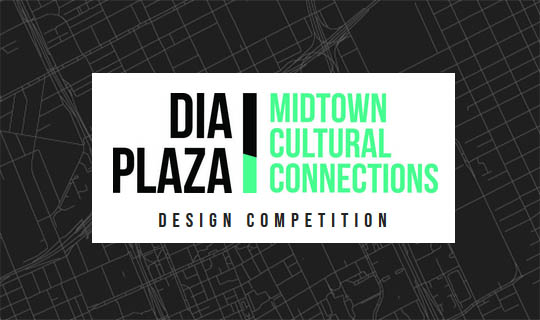