The competition focuses on creating a new, contemporary conception for the Dukla sports complex, a sporting area with one of the greatest potentials in the Czech Republic, and its immediate surroundings.

The goal of the competition is to design the most fitting urban and architectural solution for the sports complex, including the adjoining involved areas, as well as to reflect on the mission of sports and their significance and standing in today’s society.

The Dukla sports complex in Pardubice – involving athletic tracks, basketball and handball – offers an exceptional mixture of sports activities, and the conditions for emerging as a key instance of a town sports complex for the 21st century.

The competition outcome should be the formation of a modern multipurpose sports complex, which the city government of Pardubice will realise, on the basis of the competition results, as one of its long-term goals.

The competition is expected to attract entries from dozens of architectural studios in the Czech Republic and throughout Europe. It will be organized in two rounds, and candidates will remain anonymous throughout the assessment process. The eventual winner will be announced at the end of October 2016. The winner will then be contracted to draw up the documentation for the necessary building permits, plus complete plans for the first phase of the project –the indoor athletics hall. The City has earmarked up to 12 million CZK (around 450,000 EUR) for  this planning and design work. The cost of the indoor athletics hall has been estimated at between 200 and 250 million CZK (approx. 7.5 – 9.25 million EUR).

The total costs of the competition will not exceed 2.8 million CZK; this sum includes prizes for the best entries, plus remuneration for the jury and the organizing team. The prize for the winning entry is 900,000 CZK (around 33,000 EUR)

SUBJECT
The subject of the competition is the urban and architectural solution for the city sports complex Dukla Pardubice, one of the most important sports facilities in the Czech Republic. The aim of the competition is to find new and contemporary concept of the sports complex and the adjoining involved areas, which will take into account the mission of sport and its meaning for the today’s society. Dukla Pardubice should become the city sports complex of the 21st century.

ELIGIBILITY
The participants (or at least one team member) must come from the European Economic Area or Switzerland.

24th of June 2016 by midnight CET Deadline for submission of the questions (Round I).

4th of July 2016 by 5:00 pm CET Deadline for submission of competition designs (Round I) at the mailroom of the Pardubice CIty Hall.

22nd of July 2016 (preliminarily) The invitations to participate in Round II will be sent by the representative of the announcer.

5th of August 2016 by midnight CET Deadline for submission of the questions (Round II).

7th of October 2016 by 2:30 pm CET Deadline for submission of competition designs (Round II) at the mailroom of the Pardubice CIty Hall.

There is no registration fee and the registration does not bind to submit a proposal. The parties interested in participation in the competition will register by sending an e-mail at: duklasportovni@mmp.cz

The registration e-mail, preferably with subject “Dukla of Sports REGISTRATION” will contain the name and contact information of the participant or contact person. In a week after registration the password for downloading the documentation will be sent. 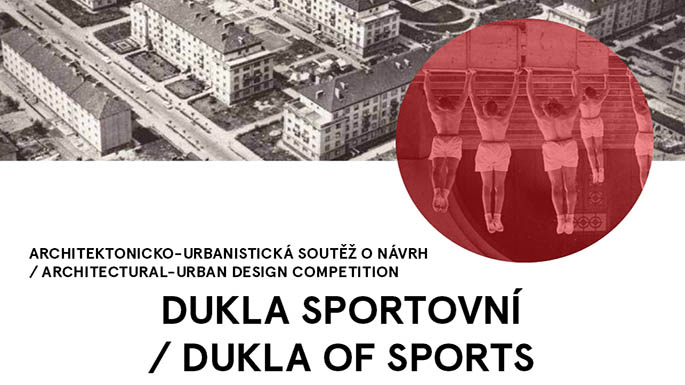