Bons Sons is a Portuguese music festival that takes place in the third weekend of august, in Cem Soldos village. Organized by the local cultural association SCOCS, Bons sons intends to be a platform of Portuguese music release, where you can watch and listen what’s best done in Portugal, introducing new projects and renowned artists to the audience.

Besides being a music festival, Bons Sons is an unique experience. Cem Soldos village is closed and its perimeter defines the precinct with 8 stages, each one dedicated to a determined them, perfectly integrated in the streets, plazas, squares, church and other places. Bons Sons also promotes a proximity relationship with its audience, involving the population. It is the habitants who greet and serve the visitors, and a special bond is created between those who host and those who visit, providing a unique experience of a musical event. The program’s careful selection, the unique precinct that is Cem Soldos and the population’s involvement in the realization of the festival, makes Bons Sons a distinguished brand in Portugal. Alongside the public’s formation, Bons Sons has the local development as the main target by sitting the youngsters and enhancing the local economy. Therefore, it has no economic profits, applying its income on cultural and social projects that benefit Cem Soldos village and the community ́s quality of life.

Eira (from the Latin area – area, piece of land) is a plain surface of hard floor with variable dimensions, where cereals were threshed and sieved after being collected, with the purpose of breaking apart the waste from the cereal grain. Its origin is connected with the birth of agriculture and consequent cereal farming, from which different techniques, tools and specific facilities developed. In Portugal, this expression first appeared in the year 1500 and it gave name to the fields right next to the houses where cereals and other agriculture products were collected to clean, dry or sieve. Eira/ threshing floor also has a Brazilian origin, referenced in “ the curious guide: Portuguese language” from Marcelo Duarte. In the colonial period, the threshing floor was part of the homes of wealthy Portuguese families, also known as porch, that were built on the upper part of the houses to protect them from rain. The threshing floor had a social function too, as it was used as a place for ceremonies and public events like dances and religious services In Portugal, particularly on the north of the country, it is usual to find espigueiros (stone granaries) surrounding the threshing floor, which were the places where the cereals were stored. The importance of the threshing floor in the life of rural population was so evident that the word “eira” gave origin to a variety of place names. Poor families used to equip their homes only using the upper roof top without a threshing floor or porch. That gave birth to the expression “sem eira nem beira” (“ without threshing floor or border”) which means having nothing or being poor.

The community threshing floor of Cem Soldos is located in a wide open field with about 130m2 and gives its name to one of the 8 stages on the festival.

With a more independent profile, the Palco Eira (Eira Stage) aims to showcase new talents and, unlike the other stages, it’s not located in the streets and squares of the Village. Instead it takes place on this area that once witnessed agriculture activities, celebrations and community events.

Besides Eira Stage, this area will also have a set of structures designed to serve the visitors with bars and restrooms.

Objective: Construction of an ephemeral installation – Eira Lounge – that meets the needs and objectives of the program.

The “Eira Lounge” project arises from the need to create, in the same place as the Eira stage, a wide relaxing space, suitable to host the audience and a meeting point before, during, and after the concerts.

Given the place ́s wideness, without houses or enough trees to produce significant shadowy areas, it ́s avoided during daytime (due to the blazing sun and heat), and uncomfortable at nighttime (due to the lack of illumination or resting and meeting spots).

Thus, the space to be created should promote interaction and the socialization among its users and reinterpret today ́s threshing floor (Eira).

Participants should be inspired e reinterpret the public space, trying to give a new life to spaces that once had great importance amongst these small communities and now are forgotten.

The project must consider the place that hosts the festival and not the traditional music festival precinct. It should respect the ecological principles and sustainability.

Since this project will be built in a place with one stage, the “Eira Lounge” shouldn ́t be an obstacle to circulation near that stage it should be a fluid, permeable space with good synergy with its surroundings (stage, bars, toilets, access, etc.). it can even be a privileged area to watch the concerts.

The facility should be designed to allow the easy assembly and disassembly, by the festival ́s organization, and also its reuse in future editions.

BUDGET
The total cost is 10.000€ (including material and human resources). 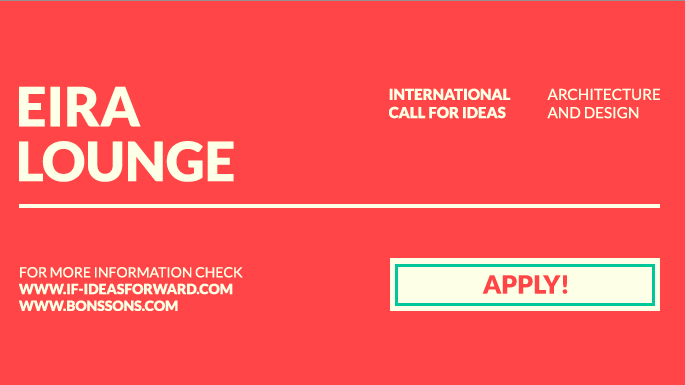