Eleven has announced their latest ideas and design open competition: ‘ Shelter 48: Emergency Life Support Design ’. The magazine’s latest challenge calls on creatives from all around the world to design innovative concepts for an emergency life-support system capable of being deployed rapidly in the immediate aftermath of a natural disaster.

Today, our climate is shifting and, as a result, more natural disasters are triggered around the globe. In the last decade alone, the number of natural disasters recorded worldwide has grown exponentially. Affecting both developed and developing countries, these leave behind a trail of mass destruction, billions of dollars of damages, and an accumulative death toll which hits the thousands.

Perhaps most surprising, is the fact that most often than not, the biggest killer isn’t the actual event itself, but the hours following the calamity. The lack of adequate protection and shelter – a basic human need to survival – coupled with the obliteration of infrastructures and services and the scarcity of provisions, make the 48 hours post-disaster a highly critical zone for survivors and victims.

For many, the response within this timeframe will be the determining factor between survival or death.

Unfortunately, however, these hours are often needed to fully understand the magnitude of the event, clear routes to affected areas, and organise/implement a full scale rescue response alongside suitable re-housing proposals. To make matters worse, it is during this time frame when secondary disasters – triggered by the first – are often most likely to occur. For the survivors – isolated and stranded in a volatile and dangerous environment – time is synonymous to life. Eventually, rescue arrives… but is it too late?

In this challenge, Eleven welcomes creatives (professionals and/or students) from around the world to design ‘Shelter 48’: an emergency life-support concept designed to target this critical 48 hour window and beyond.

Participants, who can compete individually or in a team of up to four people, are asked to register and submit their proposals online by the 11th of November 2017, in the form of two digital A1 horizontal sheets and 500 words explanation text. Models are highly encouraged but are not mandatory.

The competition, which officially opens for registration on Tuesday the 11th of July 2017, is scheduled to run for four months, closing on the 11th of November 2017 at 11:00am (UK Time). Awarded entries – competing for cash prizes and publication – will be officially announced on the 11th of January 2018.

Shelter 48 is Eleven’s seventh international competition to date. Since their creation in mid-2015, the challenges launched by this UK based magazine and creative agency have received great international success. Previous challenges have been exhibited in Europe and the USA, published in multiple international magazines such as the Architecture Review, the AJ, Dezeen, Archdaily and Designboom, and have been featured in Bustler’s ‘Top-10 Best Competitions of the Year Awards’ in both 2015 and 2016.

For more information on Eleven’s Shelter 48 challenge and to register, please visit: https://www.eleven-magazine.co…

All awarded entries will be published on Eleven Magazine and their international media partners. 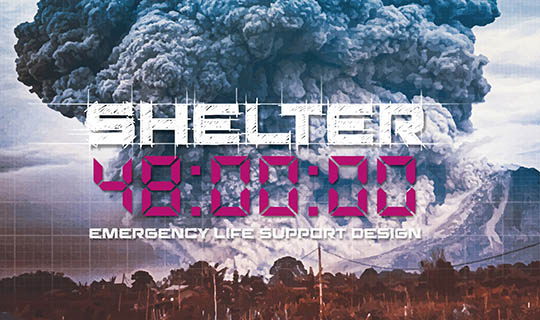