Overview: Emotions, Architecture, Opioids seeks to explore the emotional impact of architecture: how the built environment can make people feel and behave in certain ways – similar to art or music. At the same time, the brief asks participants to consider the ongoing opioid crisis in the United States, and how architecture can be used to solve problems both for the individual and for society as a whole. The goal of the competition is to present an idea that combines opioid treatment through methadone distribution with ways to combat stigma relating to drug dependency, located at a site in Venice, Los Angeles.

Emotions, architecture: Architecture affects emotions. Whether it’s a street with colorful buildings making you feel happy, or a crowded train station with low ceilings that makes you feel uncomfortable, our surroundings play an important role in shaping our mood. Sometimes tangible aspects like scale, design or materiality can make a large emotional impact, other times qualities like color, light or acoustics leave a lasting impression – positive or negative.

The fact that the built environment has an emotional impact on people also means that architecture can be used as a tool to influence people’s behavior. Although nothing new, it is an aspect of architecture that isn’t always explicitly considered by designers – much in the same way one might not always reflect on the relation our surroundings have with the way we think and feel. Furthermore, it’s more likely that someone’s home has been designed with emotional impact in mind than, say a factory – but nonetheless, they both have an effect on people in their vicinity.

Combo Competitions wants to explore the subject further by asking participants to actively use it as a design tool.

Treatment: opioid use disorder can be treated through the use of methadone medication combined with behavioral therapy, allowing patients to work, stay close to their families and, in extension, re-enter society. The programs have been shown to reduce opioid death by 50% or more.

Stigma: drug use has long been regarded as a criminal problem rather than a health concern. This stigma of addiction has played a huge role in why the opioid epidemic has spiralled into a national health crisis. Consequently, it is also a fundamental part of the solution. If enough people started viewing addiction as a health problem – and demanded it be treated as such, policy, health care and more would soon be reformed to address the demand.

This would also make a difference on an individual level, making those struggling with addiction more comfortable in addressing the problem and seeking help, knowing they won’t be judged when doing so.

Brief: The goal of Emotions, Architecture, Opioids is to design a methadone medication unit located in Venice, Los Angeles.

Proposals should address the stigma surrounding opioid dependency: in addition to administering methadone, the medication unit and its setting should offer an environment that is appealing regardless if you struggle with opioid use disorder or not.

Inviting two disparate groups to share the space has the aim of dispelling prejudice and building trust, on both sides: someone struggling with opioid use disorder isn’t necessarily a bad person, and someone with limited exposure to addiction isn’t necessarily judgemental.

Whether this is achieved by design, concept, the incorporation of a secondary function – or a combination of all of the above – is left to the discretion of each participant.

Site: The site is located in Venice, Los Angeles. It’s within walking distance from Venice Beach and adjacent to Abbot Kinney Boulevard, a highly popular LA destination renowned for its shops, restaurants and bars.

By locating a methadone medication clinic in Venice an actual need would be met, providing people in the area with aid. At the same time, as the popularity of the neighborhood attracts many visitors, more people would potentially be made aware of the opioid crisis on a human level.

The above text is a summary – visit www.combocompetitions.com to read the full brief and enter the competition. 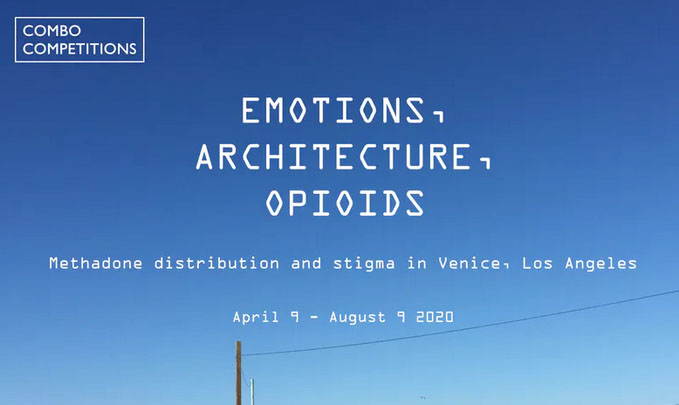