The main objective of the competition is to achieve an expert, transparent and motivated choice of a conceptual architectural project for reconstruction of the Strannopriemnitsa Hotel, part of the most visited group tourist destination in Bulgaria.

During the last few years there has been a tendency in Gabrovo to attract professionals with international education, recognition and experience. The OАEM “Etar”, as the largest group tourist destination in the city and among the most visited in Bulgaria, has been also undergoing a rapid development – it has updated its cultural calendar and has attracted both  experienced professionals and young generation team members. Тhe Museum has expanded its thematic cultural and scientific events as well as the relevant targeted groups. The OАEM “Etar” has renewed its overall graphic vision, and in 2017 a contest for a new visual identity of the Museum has been held. Many of the immovable cultural heritage have been restored and preserved.

In this context, the redevelopment of Strannopriemnitsa Hotel as an integral part of OАEM “Etar” will contribute to the renovation and modernization of the complex. It allows for improvement of the functional links in OАEM “Etar”, for optimization of the spaces and for additional new functions, which will both enrich and popularize the work of the Museum. On the other hand, the reconstruction should preserve the spirit of the authentic Bulgarian architecture, skillfully combined with the classical modernism of the building. The reconstructed building should also provide spaces suitable to the current needs and future intentions of the Ethnographic Museum.

Foreign participants are warmly welcomed should they submit all the competition documentation in Bulgarian and meet the general qualification requirements. Helpful for this purpose might be finding a Bulgarian partner. About the latter, the organizers are available to facilitate communication with the Bulgarian Chamber of Architects.

Judging and Announcement of the Winners – January 2018

The estimated value of the investment project is 2 million BGN (~ 1 022 377 euro) and the final value will be specified on the basis of the winning architectural design. Designer’s fee for the detailed design of the winner will comply with the current Chamber of Architects in Bulgaria’s Methodology for remuneration of design services.

VISIT OF THE SITE

The participants in the competition are invited to an organized tour of the site on November 18th, Saturday, starting at 14:00 in the lobby of the Strannopriemnitsa hotel. Pre-registration at info@urbanistas.eu is a prerequisite for joining the tour.

We are expecting you!

Situated at the foot of the Balkan Mountains and in close proximity of the Sivek River, Hotel Strannopriemnitsa is located 8 km south of the center of Gabrovo and is part of the Open Аir Ethnographic Museum “Etar”.

Built and furnished to comply with the overall appearance of the Ethnographic Museum, the hotel offers the opportunity for active recreation, business trips, business meetings, conference and festivals. The hotel provides conditions for year-round recreation away from the urban noise, combined with the authentic atmosphere of the Bulgarian National Revival.

The Open Аir Ethnographic Museum “Etar” is the first of its kind in Bulgaria. Opened on 7 September 1964, the Museum preserves and presents the architectural richness, the economic diversity, the lifestyle and the culture of the population of the central part of the Balkan Mountain from the end of the 18th to the beginning of the 20th century.

The museum includes over 50 buildings and objects of public and religious use, as well as several thematic expositions – the only collection of active water-powered structures in Bulgaria, “Zanaytchiiska Charshiya” ensemble and traditional activities of the Balkan people.

Urbanistas. is a platform for urban culture and projects that aims to explore, promote and contribute to improving the quality of the urban environment. 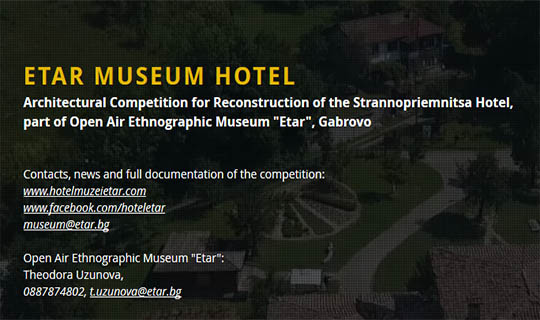