Join us in August for our new combined Studio August 8th – 17th (1 extra day), to design, fabricate, and build a intelligent dwelling.  Studio fee is now $875.  We are pleased to announce the reduced price of $875 after receiving a wonderful sponsorship which allows us to combine studios to build the house whole during one studio.

Participants may now work on both the interior (soft core) and exterior (shell) in one studio.  The deadline for applications is now June 3rd, 2015 at 11:59pm.

+FARM 2015 Summer Project MOBILE LIVING, which posits the question, how can we utilize technology to encounter housing differently while reacting to frequently changing social + economic shifts?  The project will be explored across two studios and invites participants to investigate material palettes, component prototyping, and fabrication methodologies to transform the dwelling into a intelligently inhabitable environment for living.  This intensive studio culminates in the construction of a full scale Mobile House.

PROJECT: INSIDE OUT
The act of space making finds itself in a world in which environments – whether social, economic, or behavioral reconfigure themselves with blurring effects.  The dwelling is a space where forces may interact with one another in a relatively unstable way.  As a result, a collapse of content may occur yielding a deterritorialization, or even a completely unexpected concept of nomadic thought. Architecture is hardly a static object that exists in isolation and against it’s environment, but is a responsive agent with purpose (though not beyond itself), nor isolated to suit the needs from something outside.  During the studio participants will address the issue of housing directly while examining the notion of stability by designing and constructing a mobile dwelling for a family to occupy.

NOMADIC DWELLING
Participants will engage the concept of dwelling while gaining an understanding of component fabrication and material performance, based on generative concepts in design.  The studio will conduct formal explorations and develop a 2-way architectural envelope to be more resilient to the fluctuating ecology while twisting the local tax code to ensure immediate and long term affordability.

SOFT INTERIOR
Participants will address the concept of territory system living in sustainable housing by building new ideas for interior living. Participants are asked re-interpret domestic space, and to formalize the project as a series of pre-fabricated components. The focus will be on making the dwelling comfortably stable during all four seasons.

FABRICATION AND CONSTRUCTION
This project is part of a larger investigation on the systems in architecture that respond to the ephemeral qualities of behavioral territories and social exchange. The interior will be fabricated as interchangeable systems with different materials and performance properties (energy collection, reflectivity, lighting, and acoustical performance) so the unit will continuously acclimate to it’s surroundings).

CULMINATION
The studio will conclude with participants presenting the completed house to the local community and after a celebration BBQ will drive the house on the road 1 hour north to the City of Buffalo where the house will be located for the next year. The house will be transported (towed by a Ford F-150) and given to a family (to be determined) to occupy for a year, potentially longer.

FEES
One studio is $875 for each individual, and the includes: 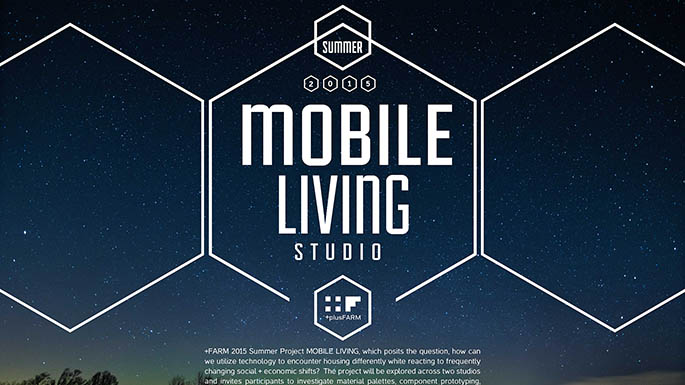