From Limit To Live It

The City of Segovia, in collaboration with IE University and the IE d-lab, in this, the UNESCO International Year of Light, are pleased to announced FROM LIMIT LO LIVE IT, an international competition for a temporary artistic intervention on the north surface of the medieval wall enclosing the old city of Segovia.

This open international competition aims to explore the capacity of an artistic intervention to reveal and recover a city element lost and forgotten: the wall that contains and marks the perimeter of the old city.FROM LIMIT TO LIVE IT is a call for an artistic intervention that aims to return the wall to the city and its inhabitants through the use of light, synomym of life and of new beginnings. To re-construct the wall, to reveal its absent presence, to materialize its space and create memory, are just some of the possible objectives that the work of art may address through its capacity for understanding, resignifying and revealing what remains unnoticed to the eyes and to the memory.The results of the competition will be displayed in La Casa de Moneda, the 16th-century Royal Mint, in the city Segovia. The winning idea will be developed and executed during the FAV, Annual Visual Festival, to be developed during the summer of 2015.

Light is synonym of life and new beginnings. UNESCO has declared 2015 to be the International Year of Light, emphasizing its importance, and the importance of the tecnologies associated with it, in the social, cultural and economic development of humanity.

According to this proclamation, and in recognition of the fundamental role of light not only in the development of life but also as its symbol, the competition FROM LIMIT LO LIVE IT calls for a temporary artistic intervention on the north wall as a strategy to return it to collective memory, and to contribute to its rebirth as a living part of the city. Proposals will be evaluated according to the following criteria:

The site is limited to the exterior surface of the north wall only. This length extends from the Casa Fuerte de los Cáceres (currently Casa de los Marqueses de Lozoya) to the Alcazar.

Unlike the south face of the wall, the exterior surface of the northern wall is in many of its sections obscured by dense vegetation, especially during the summer months. As a consequence, for long streches, the north section of the wall is only present as an intuition behind a leafy, wild vegetation.

The north wall rises from the Paseo Santo Domingo de Guzmán, a medium-speed artery adjoining the north wall along its length, connecting the Acqueduct with the San Marcos Neighborhood, at the bottom of the Alcazar.

Next to this artery, one encounters a pedestrian path of various widths, and along its slope, several buildings such as the Convento de Santa Cruz la Real (currently the Segovia Campus of IE University, Campus) and the 16th-century Casa de Moneda, the first mechanized mint in Spain. The city and its wall rises from two valleys, one on each side of the city. The northern valley is formed by the River Eresma.

The intervention must be located on the exterior surface of the north wall. Particiapnts may choose to cover the whole lenght of the north face, or one or more sections. This decision must be grounded in the concept and objectives of the proposed intervention.

FROM LIMIT LO LIVE IT is an open, international, single-stage design competition.

All material (graphic, technical and legal) available, as well as any other communication during and after the competition will be published and broadcast through it. No additional printed material is available and requests for it will not be accepted.

The questions or doubts that might emerge through the reading of this brief will be answered during the Q&A period only as it is established in the calendar.

The type of intervention proposed and the technique for its execution is open to the criteria of the participants. The only requirement is the intelligent and creative use of light as a medium to revitalize and recover the spatial memory of the wall.

The duration of the instalation will be related to the proposal and its technical and economical viability.

Conditions of the participants

All proposals submitted must do so under the code given upon the registration. Any other name, or tittle that might compromise the anonymity of the proposals will lead to automatic disqualification.

The competition jury will evaluate the following criteria for the selection of the winners and honorable mentions:

Exhibition and broadcast of the proposals

A selection of the submitted proposals will be displayed in an exhibition in the Casa de Moneda of Segovia during the summer of 2015.

The winning projects remain the intellectual property of their authors. The Segovia Municipal Government, as competition organizer, and IE University as adviser, have the right to use the winning proposals for their execution, public display, broadcasting and publishing free of charge from their authors, beyond the prizes established in this brief. The participation in this competition assumes the acceptance, from the participants, of all the terms of the competition. The copyright remains property of the authors.

The questions must be send through the form created for them in the section marked Q&A. The questions will be answered as soon as possible and published on the web page of the competition: www.fromlimittoliveit.com

The questions may be posed in Spanish or English, but the language of the responses will be English.

There will be up to 10 honorable mentions, according to the criteria of the jury. The honorable mentions will be recognized with a diploma from the Municipal Government of Segovia and IE University. These projects will be displayed in a special section, in the exhibition in the Casa de Moneda.

The First Prize will receive: 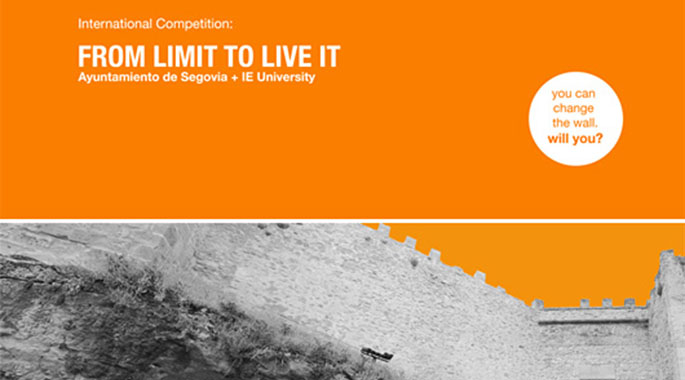