Designs and plans for cities can create visions that will take decades to be fully realized. While no one can predict the future, we can outline multiplefutures: rigorous scenarios for a changing population, market, and climate for the next 1 year, 10 years, and 50 years. These alternatives can help elected officials, businesses, philanthropic organizations, and residents understand what is possible, and make realistic, informed decisions about investments.

This approach is particularly important when addressing vacant land. In countless neighborhoods, cities, and regions across the country and the world, abandoned parcels—as small as a house lot or hundreds of acres large—may not be developed for decades to come.

Too often, vacant land has been seen only as a remnant of or absence within the 20th century city. Today, with a critical mass of designers, policymakers, scholars, artists, activists, and residents creating pilot projects, thoughtful studies, and new kinds of urbanism on abandoned properties, it is possible to imagine this land as an integral part of the future city.

In October 2014, three teams will be awarded $15,000 to participate in a six-month research and design process. Working closely with local stakeholders and national experts, teams will forecast changes in density, demand, and climate over the next half-century in New Orleans, and will tackle the social, economic, and ecological challenges underlying reuse of the most prevalent types of vacant land in the city. The project will produce implementable, replicable solutions that NORA can apply to specific sites citywide, and can help catalyze change in cities around the world.

Future Ground will develop strategies to bring small, piecemeal projects to scale at the neighborhood and citywide level; craft policy to support promising design strategies; make these strategies flexible and participatory enough to be sustained into the next generation; and share resources with a growing network of innovators who are reusing vacant land in cities around the country. 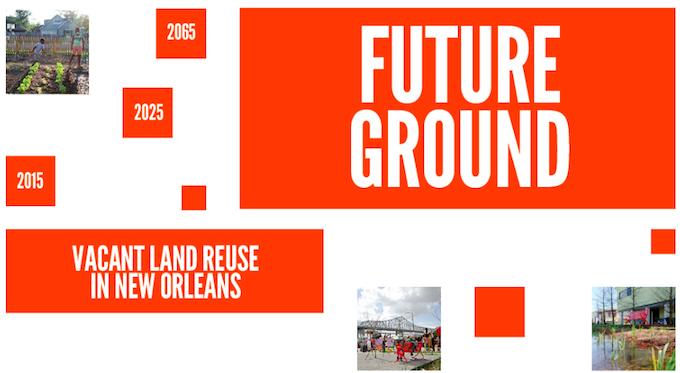