How to Win Architecture Competition ? – Anatomy of a Winning Entry

About one year ago we were hard at work, doing our best to come up with a proposal that could have a shot at winning the next edition of the world-famous eVolo Skyscraper Competition. Here’s our account of how we were able to achieve that and some tips and insights we were asked to share that you might hopefully find useful if you plan on following in our footsteps. Yearly Skyscraper Competition ran by eVolo Magazine is probably the biggest and best known architectural ideas competition out there. It’s a great fun to participate in it, since not even the sky is the limit of your imagination in this one. It’s important to recognize the type of competition you are planning to participate in – sometimes, like in our case, you’ll need to paint with broad strokes to sell the concept, other times to focus on meeting budget requirements and fine-tuning the details and these scenarios will require different approach each time.

Working on a new project is always a valuable exercise for your mind that will surely contribute to improving your skills and future creations but perhaps the greatest value of participating in competitions is the possibility to learn a tremendous amount of new things by simply checking out the projects you were competing against and the variety of different ideas other people had while solving the very same problem. Seeing what ended up beating you and won can be, at times, a truly eye-opening moment. That being said, to get in the right mindset – your goal should always be to win. If you are not confident enough that your idea is the best candidate to win in the first place, why should you believe that the jury might think so?

Some people might prefer working alone but there’s no doubt that architecture is a team sport. We strongly feel that being able to bounce ideas off of someone else is truly essential part of the process needed to produce best possible results. In our case, the fact that the three of us clicked so well was truly amazing, considering we were just a bunch of Polish guys from different universities who randomly met some 700 miles away from home during international exchange in Milan and never worked together before. Early sketch of proposed structural solutions and their influence on the building’s shape.

The single toughest and most important stage of the entire process is hands down finding the right concept. There’s obviously no single good way to go about coming up with ideas for your projects; each case is different and sometimes the best concepts come from the most unexpected places.

Teamwork was a huge part of how we came to ours. We must have shared dozens of sketches until one finally struck us as promising. A simple idea of a skyscraper using load-bearing helium balloon quickly evolved way past the original vision of its author, who seemingly discarded it at first and wanted to pursue another direction altogether. The balloon direction was enough to spark some interesting questions that ultimately led to the final design.

What if the balloon wasn’t used as a static device but rather allowed the structure to be collapsible so that one could dynamically adjust it to current needs? What if this mechanism were to be used to easily transport it from one place to another? Set of photos featuring a popular consumer product used to jokingly demonstrate the idea of a folding skyscraper to other team members. “Imagine that my hand is a giant helium balloon.”

What problem would that solve? Who could use this sort of thing? And finally an important question related to personal experience: would this work as a response mechanism to natural disasters that are currently on the rise? Photo taken during visit to post-earthquake Amatrice, central Italy, that was part of Stefano Boeri’s design class that one of the teammates attended. Besides having tremendous emotional impact, it ended up playing important role as an inspiration for the competition entry.

With all these questions answered, other parts of the design fell into place. The final shape of the building is a direct product of the underlying idea – for example, since the structure had to be foldable we looked into origami designs capable of doing just that for inspiration, the bulge on top is there to maximize balloon’s volume and so on. The same goes for utilizing cutting edge technologies like flexible perovskite solar cells.

Some of the things described above may sound outright outrageous, even on paper, but it all goes back to recognizing the type of competition you participate in – this one in particular asks for futuristic skyscrapers of tomorrow so by definition you mustn’t be afraid to think outside the box and dream big. What we did was in a way a thought experiment but we believe that even designs so strongly conceptual are capable of conveying a lot of meaning and relating to real-world experiences even if their only impact is raising awareness about an issue.

This text is more a case study than a proper guide but there are couple of things we think are worth considering when you set out to develop your own competition entry. While it’s usually not a bad thing to ask more experienced colleagues, mentors or even friends for advice when you are stuck and need one – keep in mind that the project should remain true to its original outline. If you started with a strong concept, it’s best to keep it simple, so it comes through as clearly as possible. If you throw too much out there, you risk weakening the impact of what you worked on and ultimately diluting it. If you incorporate too many ideas of other people, the project might end up being a patchwork, attempting to marry vastly different concepts or a collage of different outlooks on the main theme. Most architects you ask will be happy to provide you with solutions to your problems. But suggestions are just that and at the end of the day you have to be in charge of your own design.

Even the best idea can go unnoticed if nobody can understand your drawings. Jury of any major competition will likely need to review hundreds of proposals so you only have a split second to attract their attention. That’s why making our basic premise easily identifiable and clear was (and in our opinion should be for any project) the main goal while working on final presentation panels and each individual image.

Certainly, the renderings, diagrams and plans need to look neat and showcase a certain level of skills and visual sensibility, but most importantly they need to tell the story of the design. You all know this basic principle and it might seem simple but can get really tricky. After all, the people who work on producing those images have been discussing and drafting the project for days on end and already know it inside and out. This can lead to either considering some things obvious and not putting enough emphasis on them or on the other hand showcasing too many unnecessary details that can ultimately confuse your audience and distract from the main point you are trying to make. In the end you only have a certain amount of fixed-size panels to work with and in order to avoid cluttering them to the point where they get hard to read, you will need to prioritize.

This is the part of the process where bringing someone from outside can help tremendously and that’s exactly what we did ourselves. We knew that we were on the right track (at least in terms of the presentation) when someone who had no previous knowledge of our work immediately understood it upon seeing early draft of the panels.

One final thought – when it comes to presentation methods it’s probably best to not get too obsessed with the tools you use. It really makes no difference as long as they don’t limit you in some way – it’s entirely possible to convey design ideas using almost anything (and this obviously includes hand drawing) in a successful and time-efficient manner. Damian Granosik, Jakub Kulisa, Piotr Pańczyk are young architects from Poland. Still students at the time of the competition, all of them currently hold master’s or bachelor’s degrees and are either employed or undergoing year-out internships before continuing their studies at various major architectural offices in Europe and United States while continuously pursuing their passion for high-rise architecture. For reference, full project description and final presentation materials are available at http://www.evolo.us/skyshelter-zip-foldable-skyscraper-for-disaster-zones/ . 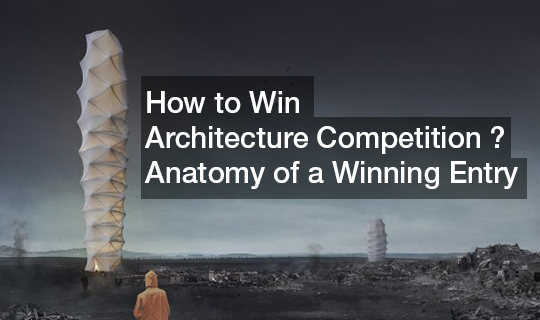