With this text, we continue series of articles on Competitions.archi. We will be showcasing the case studies of the projects that were awarded in various architecture competitions. Today’s article is about winners of one of the most prestigious competitions in the world – eVolo Skyscraper Competition.

The main focus of this series is to understand the design process behind all winning submissions. That is why we will be asking all architects and designers ‘ How you won that competition? ‘. We’re curious about their path, from the first draft, the first blueprint to the full-scale plan. We’re also interested to see which solutions had been dropped on the way, what kind of choices had to be made, and most importantly, what was the grand idea behind the project. That is why we will be asking for sketches, drafts and detailed descriptions so that we can fully understand their technique and the process that resulted in the awarded works.

This article is part of Architecture Competitions Yearbook 2020 – where more stories and inspirations like the one below can be found.

The purpose of the competition was to create and present a completely new interesting vision of unique skyscraper and present an original architectural concept, using new technologies, materials and methods of space organization. We were interested in the fact that within the competition we can realize our most, at first glance, crazy ideas in the field of architecture, which always seemed difficult or practically not suitable for implementation. 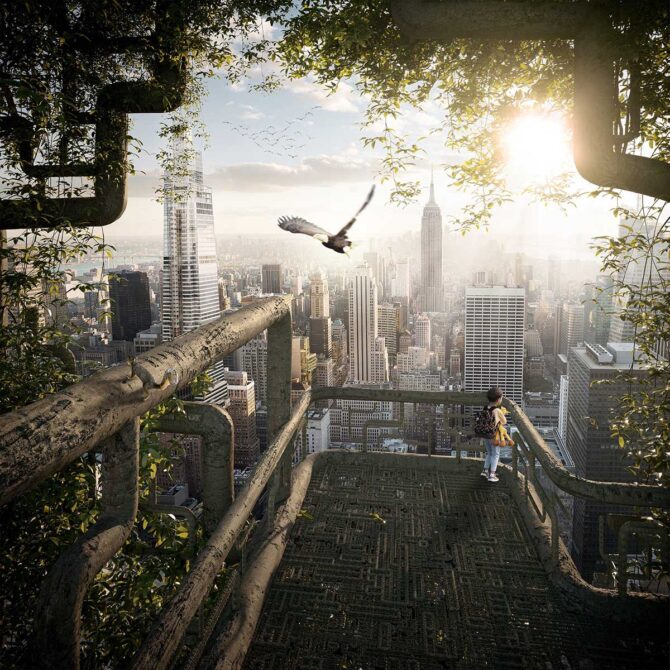 Thoughts that the flow of imagination should not be limited here motivated us to work actively and stay focused on the new competition. In our usual everyday experience of designing, architects are constantly limited by the established building codes, materials, environment, estimates and other factors. It is the architects who influence the fact that in cities, between endless grids of streets, instead of strange art monsters, we are mostly surrounded by the usual and monotonous boxes filled with people every day. Therefore, most students of the architectural universities try not to limit themselves to unrealistic and crazy ideas in diploma and course projects and often create extraterrestrial interesting things. They know that when they face the realities of design and start earning a living working in their specialty, they will not be able to fully implement the ideas that come to mind, because someone will set them an established framework. Therefore, this competition also became an opportunity for architects to remember the feeling of barrier-free in demonstrating their architectural ideas. 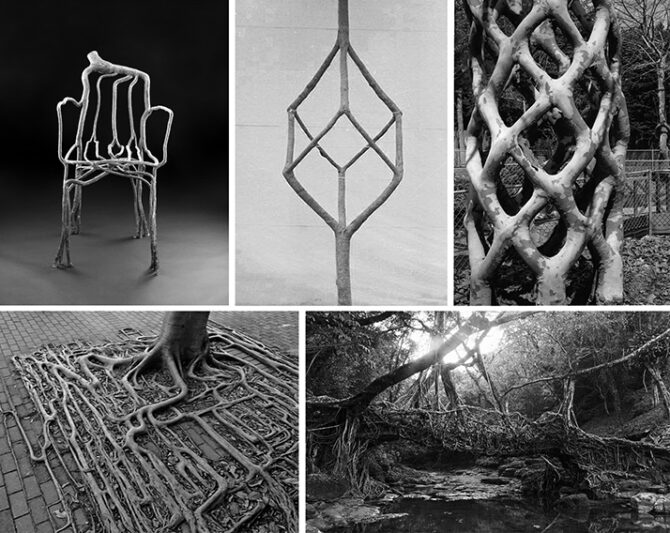 When we learned about fast-growing plants that can become the basis for the development of the idea of our living skyscraper, we began to study the peculiarities of their growth and development, methods of cultivation and care. An interesting experience for us was the study of several scientific papers in biology and dendrology, as well as materials on landscape architecture and design, which helped to understand the basics of tree growing. We had to “hang” on the web sites of gardening enthusiasts, where people share interesting ideas for creating their own hybrid plants. Our team became so obsessed with this unrealistic and fantastic idea that everyone began to create interesting illustrations with surreal trees, models from improvised materials (such as a found piece of wood or a barberry bush that grew near the office).

We were even inspired by fantasy-style films and books, in which the authors described incredible living forest cities. We’ve tried to create these worlds in architectural software. The office has become an experimental center for horticultural architecture: we have started to grow empress trees (Paulownia tomentosa) – a fast-growing plant, which by its peculiarities of growth is suitable for forming mini-skyscrapers. Paulownia grows much faster than poplar and willow. Its annual growth is unparalleled – 3-5 m, and in five years the height reaches a maximum – 20 m. The root system of the tree – a branched taproot, which reaches a depth of 6-9 m. Paulownia regenerates independently from the root and is able to grow in extreme temperatures and in different types of soils. Also, this tree does not deplete the fertile layer of soil, gives new shoots after felling and does not require re-planting of trees for a full 4-5 working cycles. That is, after a few fellings Paulownia will germinate again and again. The tree lives a long time – from 70 to 100 years. The main attraction of this medium-height, deciduous tree is its unusually large leaves, which grow up to 30-50 cm in length. We came up with the idea of growing a living house on the principle of sustainable development architecture, which will operate in the middle of a gray megalopolis and solve a number of important environmental and urban issues. 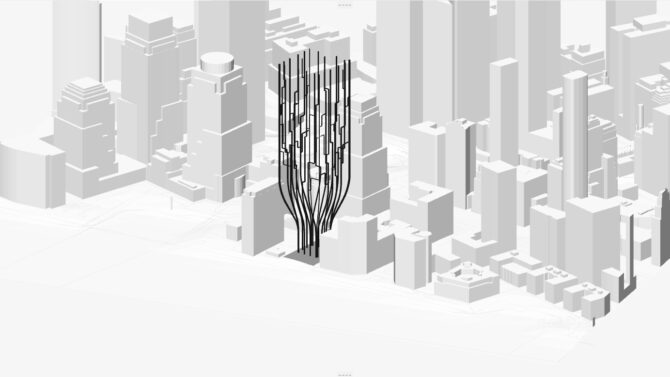 By analyzing the active process of urbanization and a decrease in the percentage of green spaces as a phenomenon that provokes a number of environmental problems. We believe that integrating genetically modified trees during the stage of their growth and development into architecture, we can restore the balance between the digitalized megacities and the Earth’s resources, which are gradually depleted. The idea of programming wood as a method of creating architecture proved to be a winning idea, because it is something new, little-studied, unpredictable, and unusual. It is important to understand that each new idea, which eventually becomes advanced, is always ahead of the period in which it is born and goes through long stages of analysis, criticism and refutation. Can human ever program an object of living nature with such accuracy? 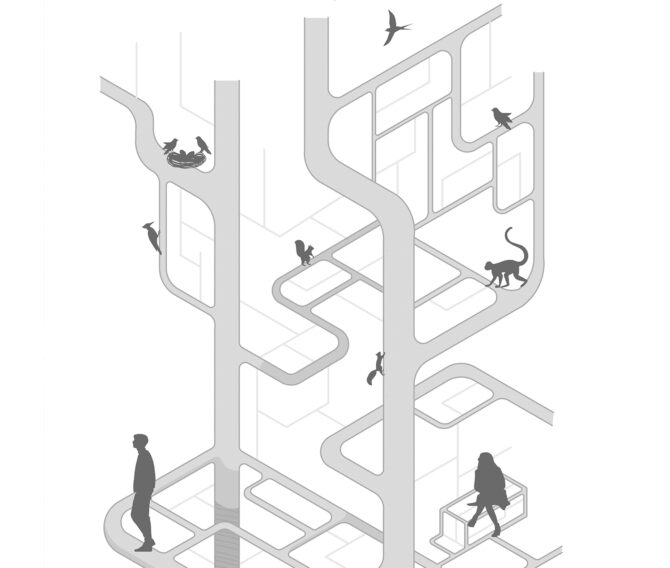 Nowadays, genetic engineering allows us to grow structures of this type. In the near future, the idea of growing a skyscraper tree as a separate living organism with its own root system, irrigation and care mechanisms, focused on adaptation to use in architecture will not seem fantastic. It is a group of unique fast-growing and tall hardwood deciduous trees, which are planted in groups in specially prepared soil (to obtain resources) and in the process of their growth form a unique architectural volume. The plant absorbs water and nutrients, which are distributed from root to tip. At the same time, the growth of the trunk circumference will gradually increase the strength of the wood structure and improve its self-supporting properties. During development, the branches of nearby trees will be grafted at different levels and form a network structure – a kind of conjugation that will strengthen the structure and continue its growth. The branches of hybrid “trees of the future” will form the structure of a living skyscraper – thy will create even, separate biomorphic structures and feed on soil, water and sun resources, creating an ecosystem that is essential for large agglomerations. As it grows, a living skyscraper can connect with nearby buildings and form green overhanging communications over a block.

Since the subject allowed us to go beyond the usual perception, the logical scenario for the growth of “living” cities is the option of placing skyscrapers with the adaptation of their height to the surrounding buildings. In larger cities, which are being built at the expense of high-rise buildings, giant skyscrapers will address a number of important environmental and urban issues. We believe that the lack of fear and passion for the unknown set us up for victory. I would like to advise future participants to reject fear, which often limits and paralyzes. Don’t be afraid to experiment with your eyes closed and listen to your subconscious, which stores 95% of innovative ideas. You must try to turn off your inner critic, who often gives your ideas the status of absurd or impossible to implement and they are simply disposed of without self-affirmation. Keep asking yourself questions like, “Could I fly to another country now if one day in 1501 da Vinci hadn’t said that man could fly and published his ‘Bird Flight Code’ with a prototype of a modern hang glider?”. 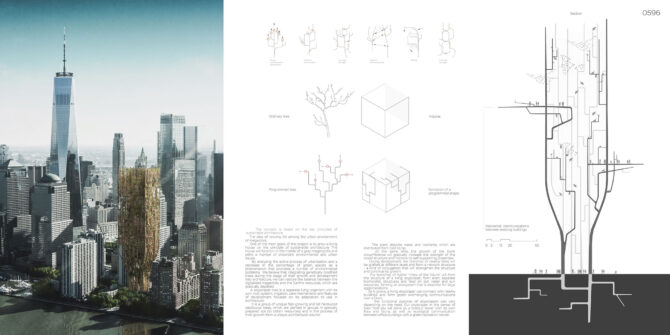 Of course, the idea seemed categorically unrealistic, and now people have wings. We believe that the driving force behind the victory in this architectural competition is the ingenuity of the team and respect for personal bold fantasies. Yes, based on this concept, we challenged ourselves and removed the established barriers. After all, to solve such a problem as initiating a new architectural discourse, it is important to learn to move away from reality and think more comprehensively, sometimes relying only on the most crazy and fantastic ideas. Don’t be afraid to become crazy architects and let your courage make you satisfied participants! 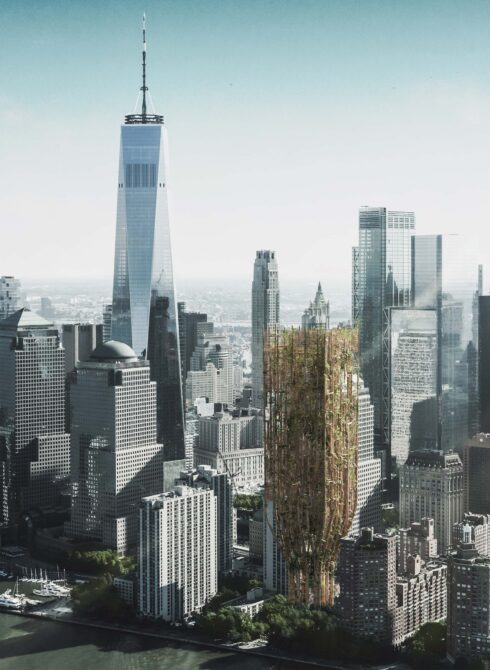 If you would like to ready more case studies like the one above please check our annual publication – Architecture Competitions Yearbook. This book is perfect for you if you want to know: 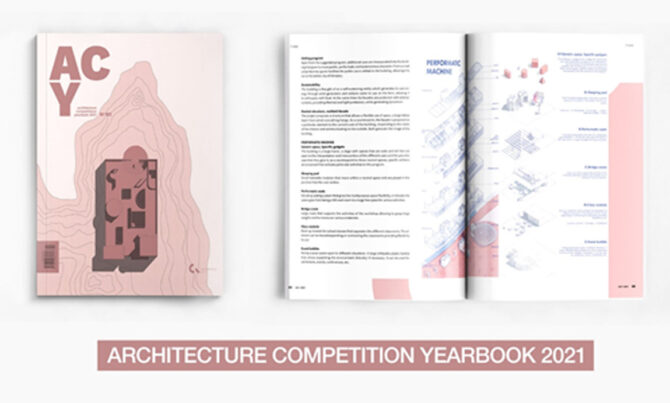 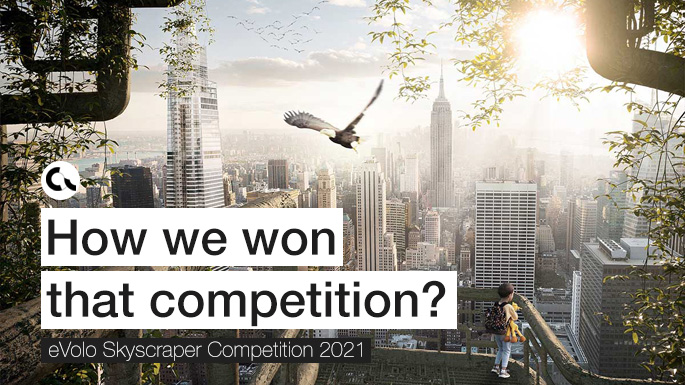