How we won that competition? | Fairy Tales 2020 – The Year Without a Winter

With this text we continue series of articles on Competitions.archi. We will be showcasing the case studies of the projects that were awarded in various architecture competitions.

The main focus of this series is to understand the design process behind all winning submissions. That is why we will be asking all architects and designers ‘ How you won that competition ? ‘. We’re curious about their path, from the first draft, first blueprint to the full-scale plan. We’re also interested to see which solutions had been dropped on the way, what kind of choices had to be made, and most importantly, what was the grand idea behind the project. That is why we will be asking for sketches, drafts and detailed description, so that we can fully understand their technique and the process that resulted in the awarded works.

We started with Emergency Operations Center – Kaira Looro Competitions  and now we will go deeper into the Fairy Tales. 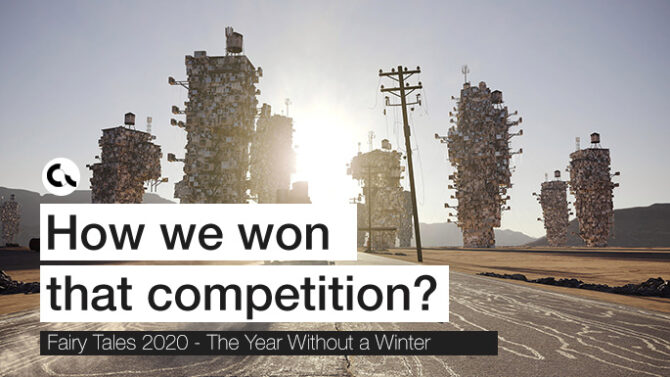 The Fairy Tales competition was the best opportunity for us to create powerful architectural images following the complexity of a real story. As 3D architectural visualizers our goal is to represent a building that doesn’t exist yet and create a life-full rendering, working on lights, materials and animations. Capturing a moment to engage the public and drive people through a story to better understand the design and architectural choices.

How to start an architectural tale?

The first step we should take was to outline the main topics and matters of our story. “The year without a winter” is a story about isolation, about a humanity that has lost hope and motivation, we wanted to talk about the near future and the extreme moment when you think there’s nothing left to do.
The choice of the narrator is the most important feature in designing a novel, because it defines the readers perspective and subsequently, their experience whilst reading the work. In our story the narrator is anonymous, but he plays part in the story, he’s not just an observer telling the tale. We see through his eyes and he is the main character, we don’t know much about him/her, could be anyone of us anywhere in the world.

We developed the narrative and illustration simultaneously, trying to balance words and images, and leaving the readers enough freedom to wonder about causes and consequences, space and time.
We try to describe the facts, raise doubts and questions without really giving any answers.

To represent the site and landscape we took our time to find references and pictures, mostly photos we took during a californian trip in the desert.

Working on the atmosphere it’s always the most important part, is the quality of the setting around us which evokes emotions, and as 3D artists, emotions are what we are always seeking to tap into.
By using atmosphere in our images, we are more likely to create something that truly speaks to the viewer.

We didn’t want to set our story in a dreamy desert of dunes and blue sky, we wanted to reach the feeling of solitude and hot temperature; the scope was to bring the readers in a lost place where the brain can’t get its bearings.

We focused our work on colors, light and sun reflections.
Like a cinematographer we chose a color scheme which is one of the first elements to communicate the message behind the design on both visual and psychological levels.

Also lighting is a key factor in creating a successful image.
Lighting determines not only brightness and darkness, but also tone, mood and atmosphere.
It’s necessary to control, test and manipulate light correctly in order to get the best textures, vibrancy of colour and luminosity especially in a situation where you need to capture and manage a huge amount of light reflected from the various parts of the scene. We decided to always have the sun in front of the camera , contrasts and backlit to recreate disturbing sensations of a burning, strong sunlight, a feeling of dread, anxiety and anguish.

Once the work on setting and global scenery was done, we started working on architecture, elements, symbols and metaphors ( the old car, the towers, the street, the water …)

The goal was a pure and simple composition, where each and every element could pop out with strength and meaning.
The car, the old orange Pripyat, is an old symbol of freedom for a generation that looks at the past with a nostalgic feeling.
The architecture represented consists in tall, unrealistic towers, giving a sensation of alienation and lack of balance.

The towers are suffocating, repetitive and visibly incapable to offer what people really need, visibly incapable to face the fast changes of a delicate environment.
It’s a picture of a community living in an old and extremely unmindful society, people are forced to adapt themselves and architecture to their needs.

What architecture and design should offer is a response to people’s need for a safe shelter. In the utopian scenario of our story people are seeking for shadow and fresh air, the result is an impossible and out of control addition of obsolete solutions on an no less obsolete architecture. Polluting air conditioning systems, completely cover the façades of the buildings; people’s activities and connections are reduced to the minimum and wobbly unsafe bridges are built to help keep the communication alive.

Technically we built the towers out of 3 very basic elements:
1.  an unstable geometrical corps built of some tilted boxes,
2. we covered up it’s vertical surfaces randomly with a dozen of different air conditioner outside units and some structure elements popping out,
3.  then we filled the horizontal surfaces and added water tanks and other obsolete roof assets on the top of the towers to make them look more like towers grabbed out from a very dense city.

All the five illustrations were made in full 3D using basic modeling techniques.
The terrain model was referred from real google earth information using a height map from a californian desert area, then we added some details and textures in Gaea terrain modeler.
The tower and the asset models, texturing and UVWs were made in 3D Studio Max as well as the final composition of the illustrations.
For the environment lighting we were using a simple HDR image without any other light source. The rendering was made in Corona render engine and except for the environment fog and the dust patch in front of the car on the first illustration, nothing else was postproduct in Photoshop.

The composition in the five images was another important aspect of our work. The composition is the frame of the image and how the elements of the mise-en-scene appear in it, is a guideline that must be observed when telling stories visually.
The first images are structured on symmetry and rigid scheme, for the final one we broke the symmetry and went for a free thoughtless composition, to let the viewer to really feel the breeze.

What can you get from architectural competitions?

The fairy tales competition, hosted by Blank Space, offered us a chance to gain experience, showcase our skills and encouraged us to adopt innovative techniques and develop our idea and skills in a more concrete way. It was an opportunity to work at our best and finally face the blank paper.

If you would like to read more case studies like the one above please check our annual publication – Architecture Competitions Yearbook. This book is perfect for you if you want to know:

Learn more by clicking the banner below.