OPENGAP organizes the fourth edition of this open ideas competition seeking for innovative, cutting-edge, contemporary, proposals regarding a new concept for artistic inspiration spaces. Participants are invited to design a place focused on the rental of spaces that motivate creativity and concentration, allowing users to focus, inspire and develop their artistic ideas. Each participant or team will define the location of their project, however, the proposal must justify the choice of the location.

The competition is open to all architects, designers, architecture students and to people around the world interested in the topic. Competitors can subscribe individually or as a team of maximum of 5 people.

The proposal submission will consist of two digital images in .jpg format, not bigger than 5MB each.

AWARDING OF PRIZES: During January, 2017

The awards will be the following:
– 1st Prize, € 2000 Two thousand Euro
– 2nd Prize, € 1000 One thousand Euro
– 3rd Prize, € 500 Five hundred Euro
– Mentions, Mentions will not have an economic prize. The jury may name as many proposals as they consider worthy to be mentioned.
The award amounts will be paid through wire transfer to the designated bank account. 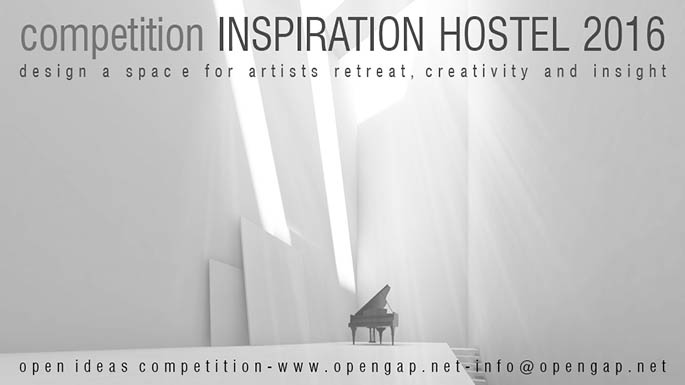