The Graduate School of Urbanism from Higher School of Economics, based in Moscow, is launching the first Future Cities Contest for students and young professionals under the title ‘Cities for a flying world’.

The aim of the competition is to promote discussion and research about the city to come in relation with the development of flying technologies that will transform our living environment in the near future. The contest will take place from 29 May to 16 October 2017 and it is part of the launching program for the new master’s program of the Graduate School of Urbanism Prototyping future cities: city and technology. The results of the contest will be announced on 7 November 2017.

The competition is open to architects, engineers, planners, designers and students and experts from any discipline who want to contribute to progress in making the world more habitable by developing ideas that could change the way we design, build and live in cities.

The competition program challenges participants to design a project related to the future of cities when flying technologies are widespread. Humanity is trying to achieve new heights and transform the air into the new ground. Even though people already know how to fly, how will the world change when flying devices are everywhere? Who would be new pedestrians in a city of self-driving vehicles and how will social life be changed? What will happen when a window of a house becomes a door to your flying car? There are a lot of scenarios presented in books and the movies about future of cities, but a future like this is coming soon.
Participants will be free to decide on the subject, scale and location of the project. Proposals could answer (but are not limited to) the following questions:
● What will cities look like when citizens have flying vehicles?
● How will buildings change if the roof or the window becomes a new entrance? Can buildings be built from top down?
● What will public transport using flying technology be like?
● How will deliveries by drone affect city communications?
● How will life be improved in poor neighborhoods by drone technology?
● Will zeppelins be used in aerial leisure or logistics?
● What will the flying cars of the future look like?
● How could new modes of vertical transportation impact the development of cities?
● Could there be aerial zeppelin communities and how will they be organized?

Participants can develop a project for a new city, new building, new device, new social platform or a mix of all of the above. We are looking for the best proposals with ideas for the world to come (in the not too distant future), where flying technologies will change the way we work, live and play in the city.

The selected Project will be presented in Moscow in an exhibition and conference in Spring 2018. 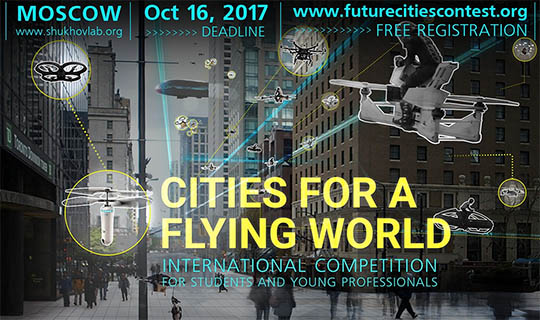