The international competition ARCHIGENIEUR AFRICA is born from the desire to support and enhance the teaching and practice of Architecture, Urban Planning, Engineering-Civil, Design Africa, to give birth to and disseminate an image positive and dynamic African local materials used in construction, cultivate inspiration and creativity, giving players the above fields the opportunity to explore and enjoy the many architectural and technical possibilities.

Our aim through this competition is to encourage, stimulate and reward creativity and inventiveness of the talents of today and tomorrow, including those of Africa. It is free and open to students enrolled in schools and universities, as well as young professionals under 35 years. Candidates can participate individually or in teams of four, maximum. Given the multiple challenges which the contest is full, it looks again a pattern of African pride.

The international jury of this third edition is chaired by Rachid ANDALOUSSI, Architect & President of Casamémoire.

“Designing or rehabilitate public space in urban areas in Africa” ​​- is the theme of the third edition of the International Competition ARCHIGNIEUR AFRICA.

In continuation of the two previous editions, while on collective housing and the market, it is proposed to develop an architectural and / or urban project around the notion of public space. This theme is of shared dimension of space, which becomes suitable for various uses, in favor of a better quality of life in cities.

This is an opportunity to think of spaces that allow the development of neighborhood life, places of exchange, conviviality, social links. For this theme, it is also open to a variety of urban situations and scales suitable for a variety of interventions, taking into account the uses of space, flows, controlling environments, the report to the street and to the surrounding frames, the presence of vegetation, the relationship to landscape. It is proposed to create or redesign a space that can range from a small square area, at the junction of several streets, the question of the relationship with the surrounding landscape of an African metropolis. We therefore propose, in connection with this Contest, to identify a public space showing malfunction or missing in a district anchored by developing an architectural and urban project in a social, economic, political, environmental. The focus will thus be on sustainable feature of the project, highlighting the use of local materials and clean energy.

The press conference and launch contest are scheduled Thursday, October 8, 2015 the City of Architecture and Heritage – Palais de Chaillot in Paris.

Participants can register until November 30, 2015 directly on the website www.afrikarchi.com/concours. A single registration is requested by team.

For the record project, it will be required the completion of site plans, mass, cuts and facades, perspectives, construction details and other documents to understand the project, taking into account the context, materials, color codes, environmental and ecological criteria.

Added to these documents will also be asked to teams a typewritten text in which they justify their choices (location, project site, materials, …). It will also be asked participants to focus on local materials used in construction in Africa, including those used in the country of location of their project.

Participants are encouraged to consult the detailed rules of the competition, which will go online at launch on websites AFRIKArchi and International Competition ARCHIGENIEUR AFRICA 2015. 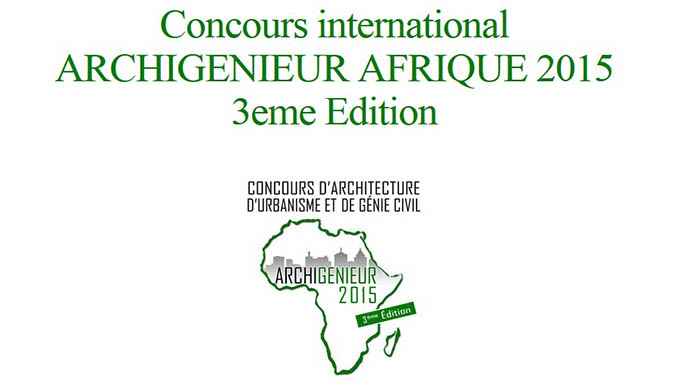