The competition concerns one of the emblematic sites of Carthage, the Acropole of Byrsa. With a total area of 5 hectares, it includes archaeological remains, outdoor spaces (UNESCO square, esplanade, large patio, wooded areas and small gardens) and historic buildings (the former cathedral of St. Louis, the former seminary of the White Fathers and the room of Father Delattre).

The architectural, landscaping and museographic program planned covers an area of 6 195 m² and has the following objectives:

Carthage is an extensive archaeological site, set on a hill overlooking the Gulf of Tunis and the surrounding plain. A metropolis of the Punic civilisation in Africa and capital of the province of Africa in Roman times, Carthage played a central part in Antiquity as a great commercial empire.

The archaeological site of Carthage has been on the UNESCO World Heritage List since 1979. The main known components of the site of Carthage are the acropolis of Byrsa, the Punic ports, the Punic tophet, the necropolises, the theatre, the amphitheatre, the circus, the villa quarter, the basilicas, the Antonine baths, the Malaga cisterns and the archaeological reserve.

The competition concerns one of the sites of Carthage, the Acropolis of Byrsa, which includes archaeological excavations, outdoor spaces (square, forum, patio and gardens) and historic buildings dating as far back as 1852 when the Saint-Louis Archaeological Museum was founded on the site.

The project aims to:

This competition is open to architects from all countries having diplomatic relations with Tunisia, constituted within a grouping composed of architects and landscape architects.

The total prize money (€200,000) will be distributed among the authors of the five winning projects:

The jury may, at its discretion, award honorary prizes to projects displaying specific merits.

The official language of the competition is French.
The competition documents are in English and French, and all information is identical in both languages. 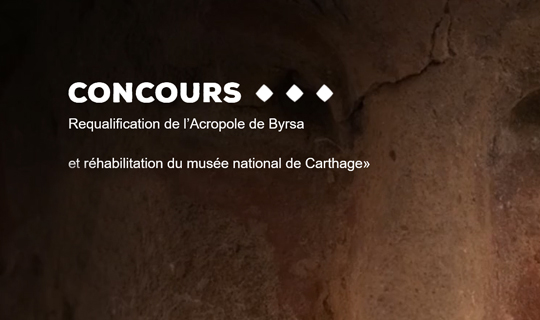