The John F. Kennedy Center for the Performing Arts, located on seventeen acres overlooking the Potomac River in Washington, D.C., is America’s living memorial to President Kennedy and his vision that the arts and cultural achievement should be an integral part of human experience. It is the nation’s busiest performing arts facility: each year the Kennedy Center’s nine performance spaces host approximately 2,000 performances for audiences totaling nearly two million.

In addition to being the home of the Kennedy Center Honors and the Mark Twain Prize for American Humor, its diverse offerings include specially priced, low-cost, and free performances, making its programs available to everyone. In addition, more than a million visitors tour the Kennedy Center’s public spaces each year, and an additional 20 million attend touring productions or tune in to Kennedy Center-related television or radio broadcasts. The Kennedy Center presents the greatest performers and performances of music, dance, and theater; supports artists in the creation of new work; and serves the nation as a leader in arts education.

The Israeli Lounge:
The existing Israeli Lounge is located on the Box Tier level of the Concert Hall, in the John F. Kennedy Center for the Performing Arts in Washington, DC, and was a gift from the People of Israel. The Concert Hall is the home of the nationally recognized National Symphony Orchestra led by Maestro Gianandrea Noseda, and for concerts, and other performances, this Lounge serves as a space for patrons, donors, guests, and Kennedy Center staff to entertain and host people from around the globe to connect and reflect on an important part of the world. Originally designed by Raphael Blumefield, the space currently features painted ceiling panels by Shraga Weil and a wood wall sculpture by Nechemia Azaz. Photos and commemoratives of former music directors from the NSO adorn the walls of this lounge. Doors midway along the south end of the Lounge serve as sound separation from the activities in the lobbies and the Grand Foyer. There is an integral bar and associated kitchen and pantry. The Lounge space is 59 feet long by 20 feet wide and approximately 20’ high. A floor plan and photographs of the Lounge are included on the design competition page on the Kennedy Center website.

Eligibility:
The competition is open to all designers, artists, sculptors and architects.  Competitors must be at least 18 years of age at the time of submission.  A competitor may enter the competition as an individual or member of a team.

Officers, members of the Board of Trustees, or employees of the Kennedy Center, their immediate families or others living in the same household and any professional interior or architectural design firms or contractors with which any of the above are affiliated are not eligible to compete.  Technical advisers for the competition and competition selection committee are also ineligible to compete. 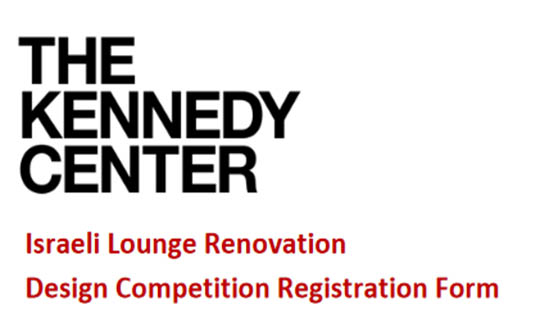