YAC launches Lighthouse Sea Hotel in collaboration with the Italian government and thanks to the support of Rimini fair. This competition challenges the designers to let the beauty of these remote places fascinate them; to imagine a new future for these abandoned lighthouses by transforming them into tourism facilities beyond compare and to make their protection and possible conservation sustainable.

Rare architectural and lan-dscape quality of the lighthouse and its context, while still valuing the research values of the competition, hereby follows a list of what can or cannot be done within the com- petition.

A. New volumes- autonomous or adjacent to the existing faci- lities- will be admitted as long as they:

B. The materials used will have to relate to the existing archi- tecture and the surrounding area. They can be compatible or dystonic, traditional or high-tech, as long as the overall design is guaranteed in order to enhance the existent ar-chitecture.

C. It is permitted to design floating facilities on the coast and a possible connection between the sea level and the lighthouse level. Whatever design solution is proposed, it is essential that it integrates in the surrounding landscape in the most harmonic and coherent way.

D. The buildings – except the lighthouse – will have to be visitable and the designers will have to take into account the needs of users with reduced mobility.

E. The architectural complex will have to be energy sustainable;

F. It is forbidden to demolish the existing buildings;

G. It is not permitted to carry out excavations or create hypogeal areas;

Like several other international projects (the Australian, Northern Europe or Balkan lighthouse accomodation), the competition will focus on the extraordinary reception potential that a coastal building can offer. Trough Lighthouse Sea Hotel, the designers will have the possibility to work in a sublime context, while designing the project of a unparalleled hotel. In this building, the lighthouse, with its romantic and dreamlike characteristics, will be the background to create suggestive relax, entertainment and wellness stays. A shelter, an escape place, a delightful picturesque place. The designers will have the op- portunity to give different interpretations of the accomodation. It can target a niche or the wider public based on adventure and nature. With this in mind, hereby follows a list of different functional possibilities. It is important to underline that the composition, integration and reshuffling of these scenarios shall be under total discretion of the designers.

• lighthouse resort; according to this vision, the lighthouse will be interpreted as the core of a network of services aimed at guaranteeing a holiday with every comfort. This center is enriched by the suggestive position and proxi- mity to the sea in order to activate an elite tourism. Some of the possible elements of such vision are elegant suites which blend into the area, a prestigious restaurant and a refined pier with beautiful panoramic strolls. According to such interpretation, even if connected with the area, the lighthouse will have to be an autonomous center.

• lighthouse landscape hotel; according to this vision, the lighthouse will be interpreted as a benchmark for a less luxurious tourism which targets nature, water sports and hiking enthusiasts. In this sense the lighthouse would be a starting point to discover the wonders of the area. A simple place with essential services where the sound of the waves, the heat of the sun and the refined combina- tion of architecture and landscape are the main source of entertainment for tourists.

• lighthouse sea center; according to this vision, the lighthouse will be interpreted as a benchmark for those who would like a stay which makes the most of the sea as a relaxation, entertainment or updating source: water sports school and a research center for the understanding and protection of the sea, reception facility with a didactic functionality which combines intellectual, sport and training activities with the creation of a culture of protection and promotion of the area.

• lighthouse art hotel; according to this vision, the lighthouse will be interpreted as a suggestive place which is a hybrid between a hotel and a museum. A place where relax is enriched by art, conference rooms, amphitheaters, permanent or temporary exhibitions, art studios, peculiar and themed accomodation with the lighthouse as a perfect background.

All the awarded proposals will be published on architectural magazines and websites + will be hosted in international exhibitions.

All the finalist proposals will be published on www.youngarchitectscompetitions.com

By violating the rules, competitors and their teams will be disqualified from the competition without any chance of getting a refund. Joining the competition implies accepting rules and service terms. The authorship of each project is equally attributed to each member of the team.

The whole procedure is computerized: 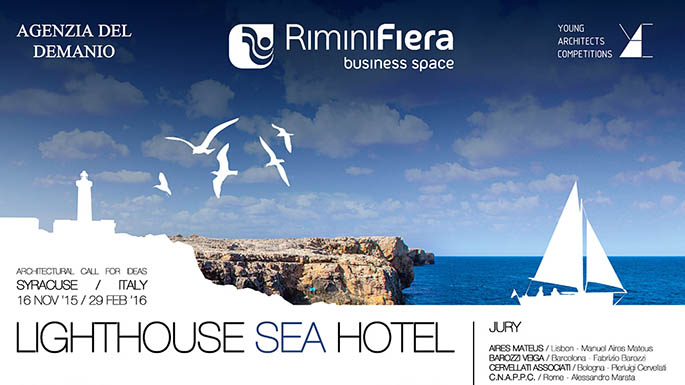