Eleven has announced their latest ideas and design competition ‘Marstopia’, the official sequel to their 2016 award-winning international challenge Moontopia. This latest competition invites creatives from all around the world to imagine Marstopia – the first human colony on Mars – and in doing so, begin to define Martian vernacular design.

Today, science fiction dreams of turning mankind into a multi-planetary species are well within our reach. As scientific and technological breakthroughs are fueling a renewed space race, it is becoming increasingly clear that the colonization of Mars is within our lifetime.

In the contemporary discussion of Martian colonization, the focus is predominantly on the science and technological aspects of getting to the Red Planet. As these fields pave the way for Mars to become an opportunity for groundbreaking exploration, where does this leave the creative industries? Despite dates being set for missions to Mars, there is still a huge gap in the field of Martian architecture and extra-terrestrial design.

This gap represents the genesis of Marstopia, a competition designed to get the creative community engaged with this new field and generate visions of future worlds beyond ours.

What does Martian vernacular design look like? You decide.

Marstopia challenges architects, designers and visionaries to engage with this hot topic, inviting them to conceptualize their visions of Marstopia and opening up the debate of Martian colonization to the creative fields.

Do you see Martian colonisation as an exciting prospect, or as a step too far? Is living on Mars an inspiring Utopia or a questionable Dystopia? Whatever your stance, this competition provides a platform for creative expression on the future of design and architecture beyond our planet.

Marstopia is open to all creatives – both professionals and/or students – from around the world. Participants, who can compete individually or in a team of up to four people, are asked to register and submit their proposals online by the 11th of March 2018, in the form of two digital A1 landscape sheets accompanied by an additional 500 words explanatory text. Models are highly encouraged but are not mandatory.  The competition, which officially opens for registration on Saturday the 11th of November 2017, is scheduled to run for four months, closing on the 11th of March 2018 at 11:00am (UK Time). Awarded entries will be officially announced on the 11th of May 2018. Winners will be selected by an international jury panel of pioneers and experts in the field of Martian exploration and architecture. The public will also have an opportunity to vote for their favorite design online which will go on to win the People’s Choice Award.

‘Marstopia’ is Eleven’s ninth international competition to date. Since their creation in mid-2015, the challenges launched by this UK based magazine and creative agency have received great global success. Previous competitions have been exhibited in Europe and the USA, published in multiple international magazines such as the Architecture Review, the AJ, Dezeen, Archdaily and Designboom, and have been featured in Bustler’s ‘Top-10 Best Competitions of the Year Awards’ in both 2015 and 2016.

For more information on Eleven’s Marstopia challenge and to register, please visit here.

*All of the awarded entries listed above will be published on Eleven’s ‘Elevenses’ feed, social media, Apple News channel, and feature in the 3rd issue of Eleven’s new bi-monthly (out on the 11th June 2018). In addition, awarded entries will receive fantastic worldwide attention through Eleven’s media partners. 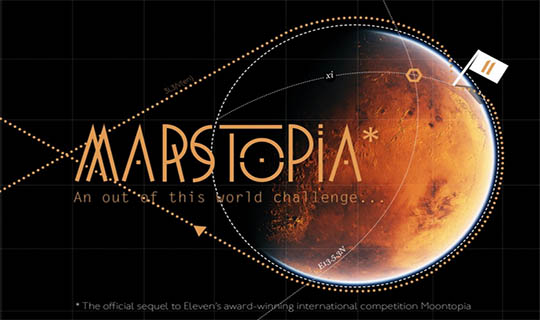