The International Ideas Competition: “MERCADO MODELO MONTEVIDEO. Thinking the city for the 21st century” aims to expand the planning options for an area located in the barycenter of the city of Montevideo.

Mercado Modelo Montevideo (Model Market of Montevideo), whose main building has an area of 25,000 m² and Art Deco references, has operated as the most important wholesale produce market for fruits and vegetables in the country since 1937. As this is a dynamic activity, it has had a significant influence on the urban evolution of this area of the city.

Considering the changes that have taken place in the territory and in marketing dynamics, the IDM or Government of Montevideo (“Intendencia de Montevideo” in Spanish) has decided to transfer the operation of Mercado Modelo to a new wholesale and distribution center in La Tablada, in the northwest of the city. This center will be managed by the UAM – Produce Hub of Montevideo (“Unidad Alimentaria de Montevideo” in Spanish): the non-state public entity created under Law No. 18.832 of October 18, 2011. Other related wholesale businesses located near the market have also decided to move to the new location. The transfer of these activities entails a historic opportunity to think about the future of the urban sector where Mercado Modelo is located, the related projects and the surrounding areas, both regarding their large urban structures, public spaces, residential networks, facilities and services, their extraordinary potential for transformation and also the conservation of their tangible and intangible heritage.

This is part of the territorial planning process focused on sustainable development that Montevideo has been promoting for almost three decades, to have a democratic, inclusive and creative city. Within the process of managing the transfer of the wholesale activities of Mercado Modelo and its surrounding activities, the UAM and the Government of Montevideo have considered it relevant to organize an international ideas competition to gather the broadest range of experts in order to have their perspectives and proposals to help shape the future of this territory.

This competition is organized by the UAM, jointly with the Government of Montevideo, who will provide the awards and mention described in paragraph VI, with the support of the Departmental Board of Montevideo and Municipality D, and the sponsorship of the Ministry of Housing, LandUse Planning and the Environment, the School of Architecture, Design and Urbanism of UdelaR (“Universidad de la República” in Spanish), the Uruguayan Association of Architects, the PanAmerican Federation of Associations of Architects and the Association of Private Promoters of Construction in Uruguay. It aims to promote the participation of national and foreign experts so they can reflect on this territory and project innovative and possible futures.

This is an international call for ideas designed as an open-competition opportunity which calls for:

a) Recommendations for the urban development of the sector in response to the possible implementation of new morphologies and complementary facilities, thus modifying the urban fabric if necessary. The following will be developed: – Proposals for the existing public space and for the creation of new public spaces. – Recommendations for the development of the private premises where activities that are complementary and related to the market are currently held, which will also be moved to the hub. (See figures M1 and M13).

b) Architectural and programmatic proposals to develop in the main building of Mercado Modelo and/or its location, as well as in surrounding premises owned by the Government of Montevideo. (See figures M14, M15 and M16). 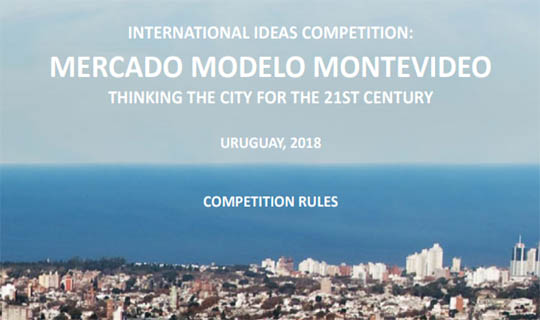