In February 2016, the Museum of London is launching an international two-stage design competition to select an architect or team of architects to create a new museum at West Smithfield in the City of London. The new museum will curate the phenomenon of London – the leading world city. It will inspire visitors to explore the UK capital’s history and imagine its future, capturing all that’s essential and inimitable in London.

This is a project rich with possibility – focused on regenerating a nationally-significant landmark and creating an atmospheric and sophisticated museum environment, integral to the City of London’s developing Cultural Hub. The Smithfield area, close to the much-anticipated Crossrail interchange at Farringdon, is expected to experience rapid economic growth as new transport links improve access.

And with the present museum at London Wall stretched to capacity, the new site at West Smithfield, circa 25,000 square metres of available space, will enable the museum to show much more of its collection – an astonishing six million artefacts – and allow it to challenge museum orthodoxies and expand its audiences.

The new museum will be playful and energising, but at the same time attuned to the historic framework of Smithfield and its culturally-resonant civic realm. The fine, disused Victorian buildings comprising the General Market, the Fish Market, and the Red House (and the basement of the listed 1960s Poultry Market) will form both the fabric of the museum and part of its collection.

Smithfield epitomises the spirit of London, past and present. The area was first settled as part of Roman London, and it speaks to the capital’s working and social history, as well as to its modern incarnation: fashionable, sociable, design-loving and ever-changing.

The Museum of London West Smithfield International Design Competition seeks an inspired architect. The successful designer will need to deeply connect with the project, conceptualise a modern experience within this significant heritage ensemble, and subsequently work with the museum to refine the brief. The museum’s plans are fully supported by its two principal funders, the City of London and The Mayor of London.

Following a number of detailed studies culminating in an Options Appraisal, the decision was taken by the museum’s Board to relocate the museum to West Smithfield, enabling it to meet the needs of a 21st century audience and giving it a sustainable future.

The move will significantly contribute to the regeneration of the Smithfield area, which is also due to benefit from Crossrail.  It will help save an important group of historic buildings with great significance for London. Working closely with the City of London Corporation and Greater London Authority, the Museum of London, together with its partners the Barbican Art Centre, Guildhall School of Music & Drama and the London Symphony Orchestra, will contribute to the City of London’s overall goal of creating a world-class Cultural Hub.

The project’s key objectives are:

Practically, the Museum of London wishes to:

The Museum of London and Malcolm Reading Consultants today [February 11, 2016] launched an international search for an outstanding architect or team of architects to create a new building for the museum at West Smithfield in the City of London.

The project at the heart of the two-stage design competition has a £130-150m construction budget, and is focused on regenerating a nationally-significant landmark and creating new contemporary galleries within a group of historic buildings on the West Smithfield site. The Museum of London is one of the top ten museums and galleries in the UK capital and responsible for the world’s largest archaeological archive, which currently holds six million artefacts.

The competition has been designed to be sympathetic to emerging designers, as well as established museum specialists. The turnover threshold for entrants has been set relatively low (in relation to project value) at £2m and collaborations between architects are encouraged. Full details of the competition, including the entry portal, are available on the dedicated website:

No design is sought at the first stage. At the second stage a panel will select at least five shortlisted designers, who will be briefed and asked to produce design concepts which reuse a number of fine Victorian buildings on the circa 25,000 sqm site. These include the now disused General Market and the Fish Market, and the triangular Red House. 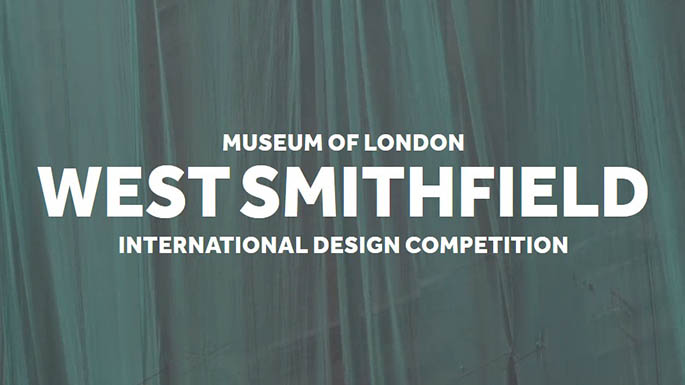