Through this ideas competition, the National Trust for Historic Preservation, People for the Pavilion, and Queens Borough President Melinda Katz hope to raise awareness worldwide of the New York State Pavilion and its future. Together, we will spark a conversation about the value of historic preservation and this irreplaceable structure by engaging the residents of Queens in re-imagining one of its most significant assets.

How do you reinvent an architectural icon for the 21st century? How can you inspire people to see potential in a structure that has been off limits for decades? And how do you activate a public space in a way that is sustainable for future generations?

The National Trust and People for the Pavilion invite you to do just that by envisioning a bold and optimistic future for the New York State Pavilion.

Submissions will be judged by a multidisciplinary jury of architects, design experts, elected officials, and Queens community leaders who will select our first place ($3,000), second place ($1,000), and third place ($500) winners. Additionally, the general public will select a fan favorite ($500) by voting on the website.

A Philip Johnson-designed masterpiece, the New York State Pavilion was the shining star of the 1964-65 World’s Fair, charming millions of visitors who flocked to Queens for the two-year celebration.

From its towering “Astro-View” observation decks to the open-air “Tent of Tomorrow,” it was unlike anything anyone had ever seen.

Fast forward to today. After decades of disuse and deterioration, this one-of-a-kind structure is poised for a dramatic comeback…but as what?

Presented by the National Trust and People for the Pavilion, and sponsored by Queens Borough President Melinda Katz, the New York State Pavilion Ideas Competition is an “anything goes” approach to radically re-imagine one of New York City’s most iconic buildings and a defining landmark of Queens.
You do not have to be an architect or an engineer to enter. This competition is open to anyone over the age of 13 who loves the Pavilion and wants to see it reopened for future generations. 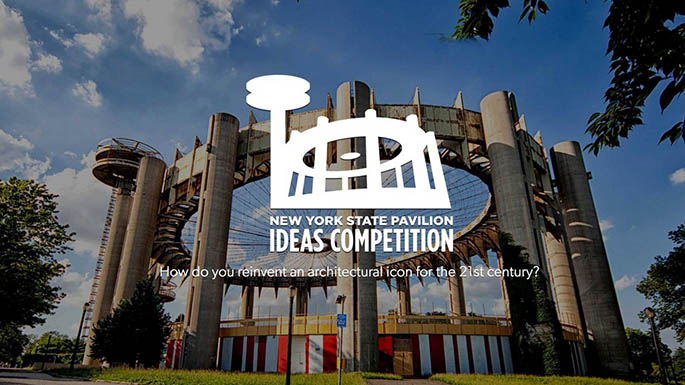