The 1st competition in 2017 became the most large-scale exhibition review in Russia so far. Architectural bureaus from Russia, the Netherlands, Great Britain, Spain and Latvia took part in the competition in 2017.
The major task of the competition is to ensure the quick implementation of the best architectural projects of preschool and school buildings, profile schools, sports, music, art, corps for initial classes, extensions to schools. The competition will promote best practices in the specific Russian context, the improvement of social infrastructure for children and the implementation of innovative design approaches in educational environment in terms of mass construction. The competition will also contribute to the broad exchange of experience among architectural bureaus from different countries involving in dialog local and Federal authorities and main architects of cities.
The participation of official delegations from the Federal and regional ministries and departments of Russia will facilitate to the identification and promotion of best practices for design, construction and implementation of modern technologies in the framework of large-scale state program on creation of new educational places across all regions of Russia until 2025.

Acceptance of applications is open and will last until 1 August 2018.
The summarizing results and ceremony of rewarding laureates of the review competition of architectural projects is on September, 26. 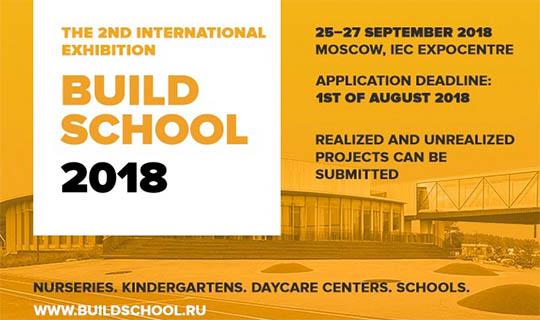