Oporto is one the main cities in Portugal, with a rich culture and traditions. With a huge historic past including Christian conquests over the Muslim empire, French Napoleonic invasions in the 19th century and even a civil war during the political tensions between monarchists and liberalists.

Oporto has a huge package of traditions ready to be told and explored by the all!

WHERE IS THE PROBLEM

The city’s lifestyle has changed during the last years due to the economic crisis that Portugal suffered. Since 2001 when the city was nominated European Capital of Culture only a few projects have been made and the ones who were built mostly focused on tourism. Oporto is now one of thousands of cities in the world victim of gentrification, with people escaping from the core and centre of the city to live in the surroundings, leaving the historic spaces to tourists, night parties and recreations.

Due to these two factors we see a city that has great characteristics but almost abandoned by their inhabitants and where the economic crisis accentuates the amount of abandoned and deserted areas. The new trend of creativity that focuses on a reinterpretation of the local economy into a new flexible system that promotes new opportunities for young creative professionals, has been, during this past few years a new starting point to revitalize Oporto.

With a huge number of young professionals fighting to get career opportunities in the city, we can see that the cultural lifestyle and environment still can manage to attract new talents. Focusing on these young professionals seems to be a huge step to be able to reach technological, creative and innovative progress that leads consequently to better economic development.

For this new class to arise the city must be able to promote the right conditions for them. Being able to attract new professionals means revitalizing the economic core and inverse the gentrification process giving a new lifestyle and creative mark to the city’s spaces.

This exercise will focus on designing a Co-working space promoting the right conditions for the young creative professionals to work in the city. The project must be able to reunite professionals from all kinds of fields and have a critical and innovative thinking about the city’s actual issues and weaknesses.

Located near the historic centre of the city, the site is mainly a car parking area partially under a bridge, on the top of a cliff with a unique view to the river and the opposite margin. Teams are free to explore the most bold and out of the box ideas, using for their advantage the relief of the site and also promoting new ways to innovate co-working spaces within the program stipulated. Within the co-working area the project must include a good spatial diversity demonstrating a study and analysis of the new tendencies in these new functional buildings.

A total fund of 2000€ in prize money will be awarded to winning entries and awards of merit. To all the awarded proposals, online promotion will be made through specialized websites and blogs.

This Competition is open to all students and professionals of areas related to Architecture, individually or in group up to 4 members. Multidisciplinary teams are encouraged.

Get the complete information visiting the official competition website listed above in the details panel. 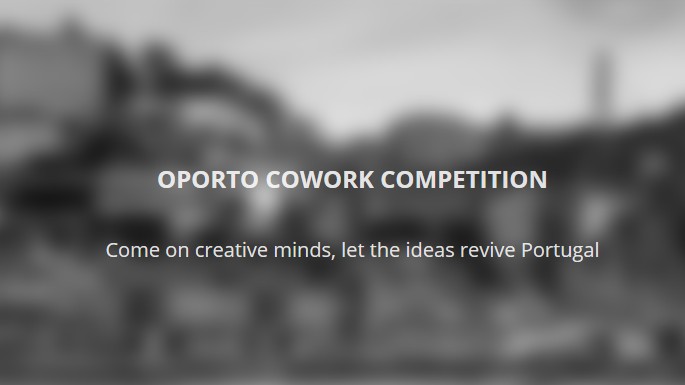