With less than three years before the Bicentennial celebration of the Independence of Peru, the Ministry of Culture, the Municipality of Lima and the Centenario Group are proud to announce the launch of an international architecture and landscaping contest for the design of a metropolitan park in the perimeter of the Pachacamac Sanctuary in the district of Lurín, Lima.

The Sanctuary houses some of the most important structures of the national archaeological heritage, covering more than fifteen centuries of human occupation. The design of a cultural park along the northern perimeter of the complex therefore invites designers to reflect on the relationship that Lima has and should have with its historical and landscape heritage.

The call is part of the same initiative that launched the MALI contest in 2016 : “2021: Bicentennial Projects”, directed by architect Gary Leggett. The park project will also belong to the official agenda of the Bicentennial, managed by the Ministry of Culture, and a tripartite agreement will be signed between the Ministry of Culture, the Municipality of Lima, and the Centenario Group, to provide an institutional framework for the development of the winning proposal.

The call seeks to create a new public space, endowed with cultural programs and public services, to help protect the Sanctuary and link it more closely to the surrounding populations. It is also aimed at creating a circuit that connects the most important cultural projects in the area: the National Museum (designed by Leonmarcial), the Site Museum of the Pachacamac Sanctuary (designed by Llosa-Cortegana arquitectos), and the Urpi Wachaq initiative for the recovery of wetlands. A park of this scale and nature would help, as well, to consolidate the Pachacamac Sanctuary as one of the country’s most important public assets and a key reference for landscape design in Lima.

The contest is anonymous in its first phase. The contestants will submit a proposal that will be reviewed by a jury in Lima from April 28 to May 1, 2019. Three finalists will be selected, who must present their proposals on May 4 in front of the same jury and a panel of advisers. The final decision will be taken by the jury after evaluating the comments that said panel may have regarding the viability or relevance of the selected designs. 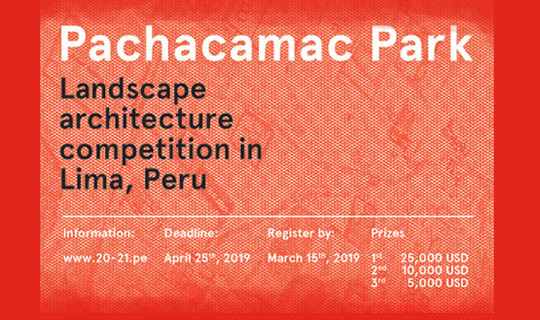