The Buildner architecture competition organiser is asking architecture enthusiasts to submit designs for a painters’ residence to be located on the beautiful shore of Cernostes Lake, in one of Europe’s greenest countries, Latvia.

Latvia has been described as a vast, unspoilt parkland that is a tapestry of sea, lakes, and woods. With only one major cosmopolitan city, the capital city of Riga, Latvia is a small country that provides its visitors and inhabitants with a vast amount of personal space. As one of the greenest countries in the world, most of Latvia is composed of fertile lowland plains and moderate hills. The countryside is a mixture of vast forests, fields, farmsteads, and pastures, with hundreds of kilometres of undeveloped seashore, lined with pine forests, dunes, and continuous white sand beaches. Latvia lies in Northern Europe, on the eastern shores of the Baltic Sea and the northwestern part of the East European Craton, with a mixed and diverse cultural history birthed from having at some point been invaded by almost every regional power. It has a temperate humid continental climate, with coastal regions possessing more of a maritime climate with cooler summers and milder winters.

Traditional Latvian architecture in the countryside and villages outside of the country’s main cities has long been constructed out of wood. For centuries, Latvian villagers constructed their homes from timber that could be collected from nearby forests, and covered them with thatch roofing. While the homes were small and modest, they still had some architectural details that made them unique.

When Latvia was conquered by German knights in the 13 century, German architectural styles began to displace the Latvian vernacular architecture from towns and cities. Therefore, larger building and more ornate structures like churches would not have typically been built in the vernacular style, although some do exist in certain villages.

Because Latvia was conquered by German knights as early as 13 century, architectural styles imported from Germany displaced the Latvian vernacular architecture from towns and cities. Therefore, you would see few churches or other larger buildings built in the vernacular style, although some exist in villages. Few vernacular buildings survived to modern times, given how prone they were to fires and demolition, with most relocated into folk museums.

The Buildner Architecture Competition Organisers are asking architecture enthusiasts to submit designs for a painters’ residence to be located on the beautiful shore of Cernostes Lake, in one of Europe’s greenest countries, Latvia. The wooden house that is currently located on-site was once owned by two brothers who lived there with their families. The current site owners are now looking to transform it into a prime example of a sustainable environment, which respects the basic principles of nature.
The new residence would need to function as a temporary home and workshop for painters. It would need to replace the current building and accommodate two painters who would move in with their families and live in the new house for three months. These artists would then vacate to make room for another two painters to replace them.

The key space of the building would be an inspiring painters’ workshop that needs to be a versatile space that would oer plenty of natural light, with the option to be transformed from one large area to smaller, more private work zones if required. The residence would need to oer a balance of privacy and interaction so that both families could live together comfortably for a prolonged period of time. The current location of the buildings – with the residential building parallel to the barn building and a closed courtyard – is typical of Latgale and Old Believers. References to this could be included in the new proposals, however, it is not mandatory. As winning designs will be considered for construction, the jury will be looking for projects that focus on eco-friendly and cost-eective building techniques, in keeping with Latvia’s reputation as one of the greenest countries in Europe.

Be a comfortable accommodation for all its occupants in all weather conditions – resistant to the elements of heat, cold, rain, snow and wind. The Painters’ Residence should act as an example of green building practices. Participants are tasked to create a space that will further encourage ecotourism in the region. Low maintenance in terms of efort and costs.

Announcement of the winners FEBRUARY 16, 2023

The competition is open to all. No professional qualifications are required. Design proposals can be developed individually or by teams (4 team members maximum). People who have direct personal or professional relationships with jury panel members or organisers may not participate in this competition. 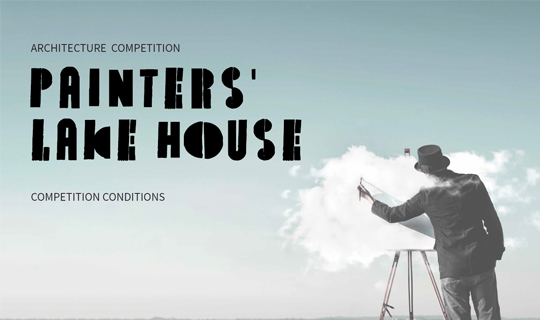