Pedestrian and Cyclist Bridge Over the Vistula River

Warsaw has just announced a competition to prepare an architectural conceptual design of a bridge for pedestrians and cyclists, which will connect both shores of the Vistula by the Karowa street.

“This will be our showcase and first passage of the kind for pedestrians and cyclists over the Vistula. Over the last years, we have done a lot to bring it closer to the locals – we have built lanes and boulevards, beaches and cafés. A new bridge, in accordance with the Warsaw Mobility Policy, will substantially improve the quality of life for cyclists and pedestrians,” says Hanna Gronkiewicz-Waltz, Mayor of the City of Warsaw.

So far Warsaw bridges have been erected as typically utilitarian structures and, unfortunately, most of them have been created without much attention paid to their architectural design.

“It is important for us that the winning project stands out above the rest in terms of a high quality of the architecture, become an inseparable element of the city’s landscape and, thanks to its uniqueness and originality, its recognizable fragment. This is why we encourage both Polish and foreign design studios to take part in the competition,” adds Michał Olszewski, Deputy Mayor of the City of Warsaw.

The bridge will bring a brand new quality to the city’s infrastructure – both architecture- and transport-wise. It will bring Praga closer to the city center, connecting the areas of the right-bank Warsaw, now being revitalized, with the Vistula Boulevards. The bridge will create a walking route between the Ząbkowska street and Powiśle and Krakowskie Przedmieście. It will be also included in the existing and planned cycling infrastructure layouts on both sides of the Vistula (cycling lanes on the Vistula Boulevards and Wybrzeże Szczecińskie). This will also create a cycling corridor, connecting Praga and Targówek with Powiśle, Śródmieście and even Wola.

The construction is planned to come to an end in 2019.

The competition involves the preparation of architectural concepts for a pedestrian and cycle bridge joining the banks of the Vistula River in the vicinity of Karowa and Okrzei Streets.

The aim of the competition is to select the best architectural concept for the pedestrian and cycle bridge in architectural, visual, functional, communication and economic terms.

The task included in the competition consists of the preparation of an architectural concept of a pedestrian and cycle bridge, on the basis of the Terms and Conditions and content-based appendices. The concept should be prepared according to the guidelines concerning transport and water management presented below. Apart from the solutions in terms of the architecture and structure of the bridge, the concept should outline the methods for the efficient connection of bridge abutments with existing and prospective transport routes located on both river banks.

The bridge concept must be characterised by high-quality architecture, with particular attention to detail. The facility should be incorporated into the city panorama, and constitute a landmark, through the use of innovative architectural thought, giving the facility a unique and original touch, highlighting its exceptional nature and significance. At the same time, attention must be paid to the existing directions of viewing axes; the bridge’s structure should appear on the city’s panorama from the right river bank in thought-out and neutral way.

1st prize in the amount of 100 000 PLN and an invitation to negotiations under the single-source procurement procedure.

and a total amount for distinctions of 50 000 PLN. 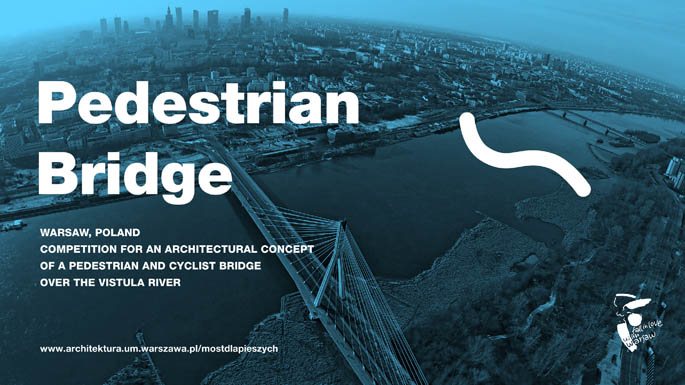